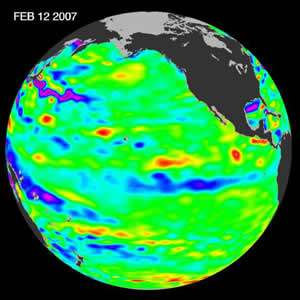 WASHINGTON, D.C. -- Imagine the lives that could be saved from flash floods and drought, the millions of dollars in fuel costs that could be avoided for fishing vessels, and the homes that could be spared from the effects of coastline erosion if only scientists could more accurately predict the dynamics of Earth's often unpredictable oceans. Armed with increasingly more accurate forecasts, weather services in countries across the globe are improving time-sensitive warnings of cyclones, flooding and high sea winds, as well as information about when it's safe to scuba dive, sail, or fish 48 kilometers (30 miles) or more beyond coastlines.

NASA and several other international organizations have joined forces to launch into space a "crystal ball" to give scientists an extended satellite data record. The data can be used to improve ocean forecasting and to test the accuracy of climate and weather models using knowledge of past ocean conditions.

The newly-launched Ocean Surface Topography Mission/Jason 2 is made up of next-generation, state-of-the-art, satellite-based instruments that will provide a global view of Earth's sea surface height every 10 days. Scientists will use these data to create complex simulations of how ocean currents, tides and eddies might behave. Similarly, the data will also allow scientists to "hindcast" -- that is, to test how accurate the simulations of past ocean forecasts were.

"To borrow from an old saying, 'it's the motion of the ocean' that is of most interest to us as scientists, and our ability to forecast it and learn lessons from it," said one of the mission's science team members, Robert Leben, an associate research professor at the University of Colorado in Boulder. "The further we can look into the past with the record of ocean measurements, the better we can predict future events. That is to say, if one day we can look back at a 20- or 30-year data record, we can more accurately say what will happen in the next 10 or 15 years because we will have a data record that indicates trends or correlations that lead to specific or expected outcomes. OSTM/Jason 2 is going to add to knowledge we've gained from the Topex/Poseidon and Jason 1 missions and put us closer to this goal."

To create the simulations, also called models, that predict ocean behavior, scientists combine information about factors such as wind speed, wave height, sea level pressure, temperature and air pressure with data gathered by satellite altimeters that measure the height of the oceans' surface (more commonly known as sea level). Radar altimeters, like those on OSTM/Jason 2, measure sea level by sending a radar pulse to the sea surface and clocking the time it takes for the signal to reflect back. All these data are fed into a computer program, allowing scientists to see into the future or to gain further insight from simulations of the past when hindcasting.

OSTM/Jason 2 is slated to orbit Earth and collect this important data set for at least three to five years. It will provide scientists with significantly more data to test their models, and extend the record of information available about ocean circulation and how the ocean affects global climate. During the mission's lifetime, scientists hope to add to what they currently understand about weather phenomena like El NiÃ±o and La NiÃ±a. During an El NiÃ±o, the eastern Pacific Ocean temperatures near the equator are warmer than normal, while during La NiÃ±a the same waters are colder than normal. These fluctuations in the Pacific Ocean temperatures can wreak havoc on climate conditions around the Pacific and beyond, leading to increased rainfall or drought.

"A longer period of data from the OSTM/Jason 2 mission can tell scientists more about how El NiÃ±o and La NiÃ±a are coupled not only to seasonal or yearly changes but to decade-to-decade oscillations of the Pacific Ocean," said Leben. "Owing to data from the mission's forerunner Topex/Poseidon and Jason 1 missions, scientists have already determined that decadal fluctuations in the Pacific enhance the frequency and intensity of shorter-term ocean events such as El NiÃ±o and La NiÃ±a. Just think of what more we'll learn as we collect future data from OSTM/Jason 2."

Knowing more about the oceans' behavior, including what El NiÃ±o and La NiÃ±a climate conditions may bring, will improve our quality of life and benefit industry. "For example, forecasts of ocean currents can predict the oceans' salt balance, which can be used to study the global water cycle," said science team member Yi Chao, a satellite oceanographer at NASA's Jet Propulsion Laboratory in Pasadena, Calif. Water evaporates from the ocean surface, and water from rivers and land-runoff cycle back into the ocean, so more precise forecasts of these movements will boost our knowledge of and ability to manage our most precious natural resource. This mission can help us determine the role of ocean circulation in completing the global water cycle."

"On the commercial front, offshore industries such as oil and gas exploration and production require accurate information about ocean circulation to minimize the impacts from strong currents and eddies," said Leben. "Search and rescue officials, marine operators, recreational boaters, and marine animal researchers all benefit from increasingly more accessible near real-time data."

"The Topex/Poseidon and Jason 1 missions got us off to a great start," said Chao. "When the two missions operated together in tandem, they doubled the coverage area and sharpness of the resolution of the sea level data so that we could 'see' more detail. This higher resolution is critical for extending the global sea level data into coastal zones, which of course are regions of great societal importance. OSTM/Jason 2 will provide another opportunity for a tandem mission with Jason-1."

Leben pointed out that with this new mission, the focus moves from research objectives to practical ways to apply the data that benefit society in tangible and essential ways.