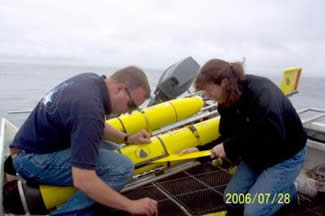 MONTEREY BAY, California -- This August in Monterey Bay, Calif., an entire fleet of undersea robots will for the first time work together without the aid of humans to make detailed and efficient observations of the ocean.

The oceanographic test bed in Monterey is expected to yield rich information in particular about a periodic upwelling of cold water that occurs at this time of year near Point AÃ±o Nuevo, northwest of Monterey Bay.

But the project has potentially larger implications. It may lead to the development of robot fleets that forecast ocean conditions and better protect endangered marine animals, track oil spills, and guide military operations at sea. Moreover, the mathematical system that allows the undersea robots to self-choreograph their movements in response to their environment might one day power other robotic teams that -- without human supervision -- could explore not just oceans, but deserts, rain forests and even other planets.

In addition, the ability to coordinate autonomous vehicles -- a challenge inspired by the grace of bird flocks and fish schools -- may give biologists greater insight into the highly efficient behaviors of animals.

The August field experiment is the centerpiece of a three-year program known as Adaptive Sampling and Prediction (ASAP), which is funded by the Office of Naval Research. The two co-leaders of ASAP are Naomi Ehrich Leonard of Princeton University and Steven Ramp of the Naval Postgraduate School.

The multidisciplinary team of ASAP investigators – who come together from more than a dozen prestigious research institutions -- consists of physical oceanographers, marine biologists and researchers in control and dynamics.

During the experiment, the ASAP system will determine what paths the underwater robots should follow to take the most information-rich samples, or measurements, of ocean activity. As the ocean changes, automated computer programs will update the sampling strategy under the supervision of the ASAP team. Most of the scientists will not be on site during the actual field experiment. The team will collaborate while the experiment is ongoing through a virtual control room, something like a chat room for the ASAP scientists. The researchers will gather online in the virtual control room to share observations and make important decisions about necessary changes to the field operation as it is under way.

The underwater robots, known as gliders, will take the ocean's temperature, measure its salinity (salt content), estimate the currents and track the upwelling. Two types of gliders will be deployed -- Spray gliders and Slocum gliders. The Slocum gliders belong to David Fratantoni of the Woods Hole Oceanographic Institution; the Spray gliders to Russ Davis of the Scripps Institution of Oceanography.

The numerical ocean modeling will be performed independently by Pierre Lermusiaux of Harvard, Yi Chao of NASA's Jet Propulsion Laboratory, Igor Shulman of the U.S. Naval Research Laboratory, and Sharan Majumdar of the University of Miami. Using powerful supercomputers, the oceanographic modelers collect and evaluate all of the ocean measurements to predict future ocean conditions.

In contrast to typical ocean-observing systems, which are static, the mobility of the gliders allows them to capture the dynamic nature of the ocean, which is always shifting in time and space. Furthermore, the gliders will be coordinated onto patterns to ensure that as they move, the measurements they take are as information-rich as possible.

Inspired by the behavior of schools of fish, Naomi Ehrich Leonard's group at Princeton has created algorithms that allow the gliders to self-choreograph their movements in a series of rectangular patterns. The patterns span a large volume that the scientists have mapped in Monterey Bay (imagine a giant aquarium with porous walls that is 20 kilometers wide, 40 kilometers long, and roughly 400 meters deep).

On a day-to-day basis the control algorithms allow the gliders to make decisions independently about how to alter their course -- without any input from humans. This day-to-day autonomy enables the gliders to move according to the organized patterns, even as they are buffeted by strong currents.

As the ocean changes and new features are detected in the measurements and the forecasts, the ASAP team will reorganize the patterns to help guide the gliders toward ocean features of interest such as eddies and thermal fronts. This process, called "adaptive sampling," is expected to dramatically improve our knowledge of the ocean and our ability to predict its chaotic behavior.