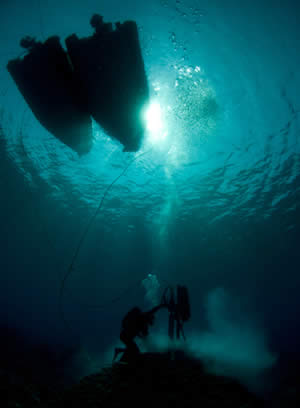 PERTH, Western Australia -- Massive corals are being used by marine scientists to unravel the effects of climate and environmental change on coral reefs in Australia’s remote north-west. Often referred to as the Methuselah’s of coral reefs because they can be older than 500 years, these massive corals grow in a series of annual bands that store a wealth of information about the environment in which they grow. It is the old skeletal material contained deep within the coral that allows researchers to compare present day growth rates with those pre-dating the industrial revolution and hence examine the consequences of climate change on coral reefs.

The team of scientists, led by Eric Matson and Dr Tim Cooper from the Australian Institute of Marine Science (AIMS), has just returned from Rowley Shoals, approx 300 km west of Broome, with long coral cores up to 350 years old, about the time when Dutch sailors in square-riggers were exploring the west coast of Australia.

Coral reefs are facing a serious crisis in the face of a changing climate. "Since the industrial revolution, levels of atmospheric carbon dioxide have risen from approximately 280 ppm to current day levels of 390 ppm" said Dr Cooper. "As a consequence, seawater temperatures have risen over the past 200 years and evidence is emerging that part of this extra CO2 may be absorbed by the oceans making them more acidic" he said. "These processes have already had a measurable effect on coral growth rates in some parts of the world, including the Great Barrier Reef, but virtually nothing is known about the climate history or growth rates of corals on reefs along Australia’s west coast" said Dr Cooper.

Specialised commercial diving equipment was needed to carefully remove a biopsy of coral skeleton with only minimal stress to the massive corals. "The only living part of massive corals is a thin layer of tissue 0.5-1 cm thick that deposits the coral skeleton beneath it as the coral grows upwards, which look similar to the layers in an onion" said Mr Matson. "We use a hydraulic drill with a diamond-studded bit to remove the core and the hole is plugged when we’re finished to promote a quick recovery from the procedure" he said. "The coral will continue growing and show no effects that a sample of skeleton has been removed from it" said Mr Matson.

Dr Janice Lough, who leads the Responding to Climate Change Research Team at AIMS was excited by the team’s haul of coral cores. "AIMS’ scientists have already detected recent declines in coral growth rates on the Great Barrier Reef but this material from Western Australia will help us determine if western coral reefs are suffering the same fate as their eastern counterparts," she said.

The trip to the Rowley Shoals is part of the first significant long-core sampling effort by the team in WA and follows a trip to Ningaloo Reef last year. The objective of the study is to collect information on the effects of climate change on coral growth rates and reconstruct past marine climate and environmental histories from reefs in the Indian Ocean spanning Indonesia to those adjacent to Perth and compare these with the extensive coral skeletal records for the Great Barrier Reef maintained at the AIMS Townsville facility.

The AIMS WA study will increase scientific knowledge of the region, provide clues to the impacts of climate change on marine communities and assist the development of future sustainability strategies.