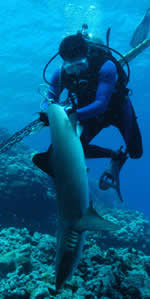 Cable television's longest-running programming event will kick off Sunday, July 27 at 9PM ET/PT with the Mythbusters Shark Special. This two-hour special follows the MythBusters as they hit the deep blue to take a bite out of shark folklore. Among the myths tackled in this special: Are sharks repelled by magnets? Do dogs attract sharks? Do the vibrations caused by a flapping injured fish attract sharks? The show's climax features the construction of a 16 foot robo-shark.

Monday, July 28 will feature Surviving Sharks at 9 p.m., hosted by Survivorman’s Lee Shroud, and Day of the Shark at 10 p.m., a special chronicling real shark attacks.

Tuesday will kick off with the Dirty Jobs shark special and How Not to Become Shark Bait, which will give advice to help avoid becoming dinner when swimming in the ocean.

Thursday will bring Mysteries of the Shark Coast, profiling Australia’s northeastern coastline, home to more sharks than anywhere in the world, but where sharks are also disappearing at a rapid rate.

Throughout the week, Discovery will run public-service announcements for the Ocean Conservancy, educating viewers about threats facing sharks.

Last year's Shark Week was watched by 27.2 million viewers, the most successful Shark Week to date.