Scientist: Salmon Sperm Eyed As Source For Eco-friendly BioLEDs; 'It's Thrown Away By The Ton' 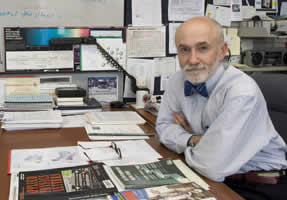 Ohio Eminent Scholar Andrew Steckl is one of the world's leading experts in photonics. (Photo by Dottie Stover)

Electrons move constantly — think of tiny particles with a negative charge and attention deficit disorder. It is through the movement of these electrons that electric current flows and light is created.

Steckl is an Ohio Eminent Scholar in UC’s Department of Electrical and Computer Engineering. He believed that if the electrons’ mobility could be manipulated, then new properties could be revealed.

In considering materials to introduce to affect the movement of the electrons, Steckl evaluated the source of materials with an eye to supply, especially materials that do not harm the environment.

“Biological materials have many technologically important qualities — electronic, optical, structural, magnetic,” says Steckl. “But certain materials are hard for to duplicate, such as DNA and proteins.” He also wanted a source that was widely available, would not have to be mined, and was not subject to any organization or country’s monopoly. His answer? Salmon sperm.

“Salmon sperm is considered a waste product of the fishing industry. It’s thrown away by the ton,” says Steckl with a smile. “It’s natural, renewable and perfectly biodegradable.” While Steckl is currently using DNA from salmon, he thinks that other animal or plant sources might be equally useful. And he points out that for the United States, the green device approach takes advantage of something in which we continue to be a world leader — agriculture.

Steckl is pursuing this research in collaboration with the Air Force Research Laboratory. The research was featured recently in such premier scientific publications as the inaugural issue of naturephotonics and on the cover of Applied Physics Letters.

“The Air Force had already been working with DNA for other applications when they came to us and said, ‘We know that you know how to make devices,’” quotes Steckl. “They also knew that they had a good source of salmon DNA.” It was a match made in heaven.

So began Steckl’s work with BioLEDs, devices that incorporate DNA thin films as electron blocking layers. Most of the devices existing today are based on inorganic materials, such as silicon. In the last decade, researchers have been exploring using naturally occurring materials in devices like diodes and transistors.

“The driving force, of course, is cost: cost to the producer, cost to the consumer and cost to the environment” Steckl points out, “but performance has to follow.”

And what a performance — lights, camera, action!

“DNA has certain optical properties that make it unique,” Steckl says. “It allows improvements in one to two orders of magnitude in terms of efficiency, light, brightness — because we can trap electrons longer.”

“Some of the electrons rushing by have a chance to say ‘hello,’ and get that photon out before they pass out,” Steckl explains. “The more electrons we can keep around, the more photons we can generate.” That’s where the DNA comes in, thanks to a bunch of salmon.

“DNA serves as a barrier that affects the motion of the electrons,” says Steckl. It allows Steckl and his fellow researcher, the Air Force’s Dr. James Grote, to control the brightness of the light that comes out.

“The story continues,” says Steckl, again smiling. “I’m receiving salmon sperm from researchers around the world wanting to see if their sperm is good enough.” The next step is to now replace some other materials that go into an LED with biomaterials. The long-term goal is be able to make “green” devices that use only natural, renewable and biodegradable materials.