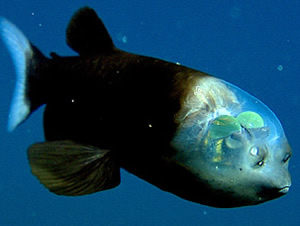 The barreleye (Macropinna microstoma) has extremely light-sensitive eyes that can rotate within a transparent, fluid-filled shield on its head. (MBARI

MONTEREY, California -- Researchers at the Monterey Bay Aquarium Research Institute recently solved the half-century-old mystery of a fish with tubular eyes and a transparent head. Ever since the "barreleye" fish Macropinna microstoma was first described in 1939, marine biologists have known that it's tubular eyes are very good at collecting light. However, the eyes were believed to be fixed in place and seemed to provide only a "tunnel-vision" view of whatever was directly above the fish's head. A new paper by Bruce Robison and Kim Reisenbichler shows that these unusual eyes can rotate within a transparent shield that covers the fish's head. This allows the barreleye to peer up at potential prey or focus forward to see what it is eating.

Deep-sea fish have adapted to their pitch-black environment in a variety of amazing ways. Several species of deep-water fishes in the family Opisthoproctidae are called "barreleyes" because their eyes are tubular in shape. Barreleyes typically live near the depth where sunlight from the surface fades to complete blackness. They use their ultra-sensitive tubular eyes to search for the faint silhouettes of prey overhead.

Although such tubular eyes are very good at collecting light, they have a very narrow field of view. Furthermore, until now, most marine biologists believed that barreleye's eyes were fixed in their heads, which would allow them to only look upward. This would make it impossible for the fishes to see what was directly in front of them, and very difficult for them to capture prey with their small, pointed mouths.

Robison and Reisenbichler used video from MBARI's remotely operated vehicles (ROVs) to study barreleyes in the deep waters just offshore of Central California. At depths of 600 to 800 meters (2,000 to 2,600 feet) below the surface, the ROV cameras typically showed these fish hanging motionless in the water, their eyes glowing a vivid green in the ROV's bright lights. The ROV video also revealed a previously undescribed feature of these fish--its eyes are surrounded by a transparent, fluid-filled shield that covers the top of the fish's head.

Most existing descriptions and illustrations of this fish do not show its fluid-filled shield, probably because this fragile structure was destroyed when the fish were brought up from the deep in nets. However, Robison and Reisenbichler were extremely fortunate--they were able to bring a net-caught barreleye to the surface alive, where it survived for several hours in a ship-board aquarium. Within this controlled environment, the researchers were able to confirm what they had seen in the ROV video--the fish rotated its tubular eyes as it turned its body from a horizontal to a vertical position.

In addition to their amazing "headgear," barreleyes have a variety of other interesting adaptations to deep-sea life. Their large, flat fins allow them to remain nearly motionless in the water, and to maneuver very precisely (much like MBARI's ROVs). Their small mouths suggest that they can be very precise and selective in capturing small prey. On the other hand, their digestive systems are very large, which suggests that they can eat a variety of small drifting animals as well as jellies. In fact, the stomachs of the two net-caught fish contained fragments of jellies.

After documenting and studying the barreleye's unique adaptations, Robison and Reisenbichler developed a working hypothesis about how this animal makes a living. Most of the time, the fish hangs motionless in the water, with its body in a horizontal position and its eyes looking upward. The green pigments in its eyes may filter out sunlight coming directly from the sea surface, helping the barreleye spot the bioluminescent glow of jellies or other animals directly overhead. When it spots prey (such as a drifting jelly), the fish rotates its eyes forward and swims upward, in feeding mode.

Barreleyes share their deep-sea environment with many different types of jellies. Some of the most common are siphonophores (colonial jellies) in the genus Apolemia. These siphonophores grow to over 10 meters (33 feet) long. Like living drift nets, they trail thousands of stinging tentacles, which capture copepods and other small animals. The researchers speculate that barreleyes may maneuver carefully among the siphonophore's tentacles, picking off the captured organisms. The fish's eyes would rotate to help the fish keep its "eyes on the prize," while its transparent shield would protect the fish's eyes from the siphonophore's stinging cells.

Robison and Reisenbichler hope to do further research to find out if their discoveries about Macropinna microstoma also apply to other deep-sea fish with tubular eyes. The bizarre physiological adaptations of the barreleyes have puzzled oceanographers for generations. It is only with the advent of modern underwater robots that scientists have been able to observe such animals in their native environment, and thus to fully understand how these physical adaptations help them survive.