Not So Bad: Great Lakes Fish Feeding On Invading Shrimp 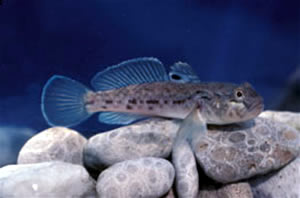 An adult round goby. The fish are aggressive and voracious bottom dwellers that drive away small native fish in the Great Lakes. 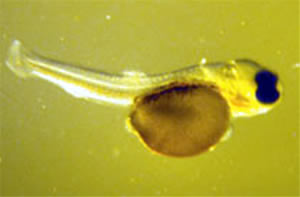 ANN ARBOR, Michigan -- Ever since University of Michigan fishery biologist David Jude discovered non-native round gobies in the Great Lakes in 1990, scientists have been trying to figure out exactly how the unwanted intruders got there, and how they quickly spread to all five lakes.

Oceangoing freighters were the prime suspects, right from the start. But round gobies are bottom-dwelling fish, so how could significant numbers of them get inside ships that normally take on ballast water close to the surface?

"It's been a mystery to us as to how they were getting on board. We've been scratching our heads about how that happened," said Jude, a research scientist at the U-M School of Natural Resources and Environment. Now Jude and U-M graduate student Stephen Hensler say they've found the answer: synchronized swimming on a grand scale.

At night during the summer breeding season, countless newly hatched round gobies leave their lake-bottom homes and swim to the surface. This nocturnal migration—never before documented among round gobies—boosts the chances that large numbers of hatchlings will get sucked into the ballast tanks of Great Lakes freighters.

Jude and Hensler report their findings in the current issue of the Journal of Great Lakes Research. In addition to uncovering a previously unknown chapter in the life history of the round goby, the authors say their results have implications for ballast-water management on freighters that visit Great Lakes ports.

Newborn fish of many other species—as well as tiny aquatic animals called zooplankton—are known to rise to the surface at night and descend to the depths after sunrise, following food and evading predators, Hensler says.

"If you had some sort of policy whereby ships would only take on ballast water at the surface and only during the day, it would reduce the likelihood of introducing new species and spreading existing ones around," said Hensler, a doctoral student at the School of Natural Resources and Environment.

At least 185 non-native aquatic species have been identified in the Great Lakes, and ballast water is blamed for the introduction of many—including the notorious zebra and quagga mussels and two goby species. The voracious and aggressive round goby is native to the Caspian and Black seas in eastern Europe. Anglers despise them because they steal bait from hooks.

Scientists say round gobies have disrupted the Great Lakes ecosystem and are responsible for local extirpations of at least three species of small, native, bottom-dwelling fish: the mottled sculpin, the greenside darter and the logperch.

Jude was the first to find round gobies in the Great Lakes system, in1990 on the St. Clair River northeast of Detroit. By 1995, they had spread all the way to Duluth Harbor, on the western shores of Lake Superior.

Jude and Hensler launched the latest study several years ago after unexpectedly finding newly hatched round gobies in surface nets towed at night on Lake Michigan. Newborn gobies are known as larvae.

Follow-up efforts included a trip to western Lake Erie in June 2005, where they collected 167 round goby larvae in nets towed at the surface at night, but caught none during the day. All of the larvae were between a quarter and a third of an inch long, which corresponds to an age of 2 to 5 days.

In the Great Lakes, an adult round goby is typically 3 to 5 inches long.

U-M fish-collection trips to Lake Michigan and Muskegon Lake were funded by grants from the Great Lakes Fishery Trust and Michigan Sea Grant. F.T. Stone Laboratory and Ohio Sea Grant provided funding for the Lake Erie work through a grant from the National Oceanic and Atmospheric Administration.