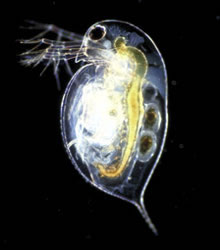 An enlarged view of Daphnia pulex, which has an actual length of 2-3 cm. (Photo courtesy Paul Hebert, University of Guelph.)

HANOVER, New Hampshire -- Research led by Dartmouth scientists found that animals fed nutritious, high-quality food end up with much lower concentrations of toxic methylmercury in their tissues. The result suggests ways in which methylmercury—a neurotoxin that can accumulate to hazardous levels—can be slowed in its passage up the food chain to fish.

"This research provides evidence that by eating high-quality food, organisms may reduce their bodily concentration of a contaminant," said lead author Roxanne Karimi, a graduate student in the Dartmouth Department of Biological Sciences. "These findings allow us to predict the conditions under which freshwater fish are likely to carry relatively high mercury levels."

The research is reported in a paper titled "Stoichiometric controls of mercury dilution by growth," to be published in the April 23, 2007 online "Early Edition" of Proceedings of the National Academy of Sciences.

In laboratory experiments, Karimi and colleagues from Dartmouth, Lakeland College, and Stony Brook University, studied the translucent water flea Daphnia pulex, a species of zooplankton that is one of the chief food sources for freshwater fish. The team measured, over five days, the growth of two groups of juvenile Daphnia, which in their mature state are about 2-3 millimeters in length. Both groups were fed the same amount of algae contaminated with trace amounts of methylmercury; however, one group's algae was of greater nutritional value.

The animals that received the nutritious, phosphorous-rich algae grew 3.5 times faster than the other group, the research found. Although the faster growing zooplankton ingested roughly the same amount of methylmercury as the other group, they ended up with one-third the concentration of toxin in their tissues because, as they grew faster, the toxin was diluted.

Methylmercury is a neurotoxin found in all water bodies. While normally present in the water only in trace amounts, methylmercury presents a serious health hazard to humans due to biomagnification, a process in which a toxin occurs in higher and higher concentrations in animal tissue as one moves up the food chain. Daphnia and other zooplankton are a major source of methylmercury for lake fish. When water fleas and other zooplankton grow rapidly by feeding on high quality food, the rate at which methylmercury is accumulated and transferred through the food chain may decrease, the research suggests.

This same effect could occur in other organisms for other contaminants, such as PCBs and DDT, which also biomagnify in a food chain, Karimi said. "These contaminants pose health risks because they tend to remain in the body and so accumulate to high concentrations. When organisms have the optimal combination of nutrients available to them, they are able to gain more weight relative to the amount of toxin they get from their food. This is what results in the process of diluting the toxin by rapid growth."

This study is one of a number of ongoing research projects at Dartmouth that look at methylmercury and other toxic heavy metals in aquatic food webs. Many of these projects are being undertaken by Dartmouth's Center for Environmental Health Sciences and one of its programs, the Dartmouth Toxic Metals Research Program, which is funded by the the Superfund Basic Research Program (SBRP).

"One of the most distinctive aspects of Dartmouth's center and the SBRP in general is the drawing together of scientists from multiple disciplines to solve problems of significant human impact," said Karimi's advisor and co-author Carol Folt, Dartmouth dean of faculty, professor of biological sciences, and associate director of the Dartmouth toxic metals program. "Dartmouth's program has made great strides in addressing public and environmental impacts of both arsenic and mercury with this approach. Our particular focus—understanding the environmental factors that drive mercury to reach some of the highest levels in fish from the most pristine systems—is of special value for public policy. Mercury in fish is a worldwide issue of concern, meriting region-wide approaches for effective and timely mitigation and global cooperation."