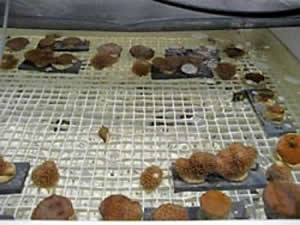 VIRGINIA KEY, Florida -- A modest new lab at the Rosenstiel School is the first of its kind to tackle the global problem of climate change impacts on corals. Fully operational this month, this new lab has begun to study how corals respond to the combined stress of greenhouse warming and ocean acidification. The lab is the first to maintain corals under precisely controlled temperature and carbon dioxide conditions while exposing them to natural light conditions.

“I was interested in stressing corals at differing levels of carbon dioxide and temperatures much like they would experience in the next 50 to 100 years to see if skeletal development is affected,” said Dr. Chris Langdon, one of the lab’s creators and the scientist who developed a similar lab at the University of Hawaii studying corals at varying carbon dioxide changes alone.

Dr. Andrew Baker, co-creator and also a Rosenstiel School faculty, has spent much of his career looking at climate change impacts on corals and has geared his perspective towards understanding whether corals can adapt to any of these changes. “It’s clear that corals of the future will see much warmer, more acidic oceans than we have now,” Baker said. “By mimicking these same changes in the laboratory we get a much clearer idea of how these corals will respond.”