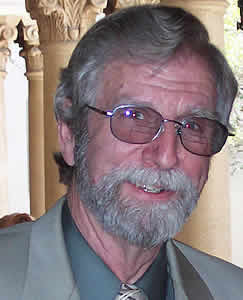 Harry Green is a distinguished professor of geology and geophysics in the Department of Earth Sciences. Photo credit: Green lab, UC Riverside.

RIVERSIDE, California -- A popular view among geophysicists is that large amounts of water are carried from the oceans to the deep mantle in "subduction zones," which are boundaries where the Earth's crustal plates converge, with one plate riding over the other.

But now geophysicists led by the University of California, Riverside's Harry Green, a distinguished professor of geology and geophysics, present results that contradict this view. They compare seismic and experimental evidence to argue that subducting slabs do not carry water deeper than about 400 kilometers.

"The importance of this work is two-fold," Green said. "Firstly, if deep slabs are dry, it implies that they are strong, a major current question in geophysics that has implications for plate tectonic models. Secondly, even small amounts of water greatly reduce the viscosity of rocks; if water is not cycled deep into Earth, it means that mantle convection has not been as vigorous over time as it would have been with significant water."

Study results appear in the current issue of Nature.

The Earth's lithosphere is formed at mid-ocean ridges where magma upwells and freezes to form new oceanic crust. Interaction between cold water of the deep ocean and the extreme heat of magma results in widespread cracking of rocks and a hydrothermal circulation that drives sea water several kilometers below the surface.

Away from the mid-ocean ridges, the lithosphere moves along under the ocean until it reaches an oceanic trench, long topographic depressions of the sea floor. Here, the lithosphere bends sharply and descends back into the mantle. Near the trench, numerous faults are created that provide a pathway for additional water to enter the down-going lithosphere. Subsequent dehydration results in large amounts of this water leaving the subducting slab and migrating upwards. The ensuing instability leads to seismic activity.

Geophysicists have long suspected but only recently established that at depths less than about 250 kilometers earthquakes occur through dehydration of minerals like serpentine. But when Green and his colleagues studied the data for deeper earthquakes, they found that the subducting slabs are essentially dry, providing no pathway for significant amounts of water to enter the Earth's lower mantle.

Further, the researchers cite evidence for olivine in the slabs at these depths, despite the fact that it is not stable below about 350 km.

"At these depths, olivine should transform to the stable phase, spinel," Green said. "The very cold temperatures deep in the downgoing slabs inhibit this transformation. Experiments show that even extremely small amounts of water, if present, would cause the olivine-to-spinel transformation to run. But we see no spinel here, just olivine, which confirms that the slabs are dry."

Green explained that the olivine found below 400 kilometers is "metastable," meaning it is physically present as a mineral phase even though this is not its "right phase" at such depths â akin to a diamond, which forms only at the kind of high temperatures and pressures found very deep in the Earth's crust, being brought to the Earth's surface.

"At such depths, the olivine should undergo a phase transformation," he said. "A different crystal structure should nucleate, grow and eat up the olivine. If it is very cold in the center of subducting slabs, the reaction won't run. This is exactly what is happening here."

According to Green, the presence of the metastable olivine provides an alternative mechanism to initiate deep earthquakes â a mechanism he discovered 20 years ago â and also to cause them to stop at around 680 kilometers, where they are seen to stop.

"Does this mean that Earth's deep interior must be dry? Not necessarily," he said. "It is possible there are other ways â let's call them back roads â for water to penetrate the lower mantle, but our work shows that the 'super highway,' the subducting slabs, as a means for water to enter the lower mantle can now be ruled out."

Green and his colleagues cite the evidence for the existence of metastable olivine west of and within the subducting Tonga slab in the South Pacific and also in three other subduction zones â the Mariannas, Izu-Bonin and Japan.