Fish skin shoes set to make a splash; 'Fish skin is another piece of leather' 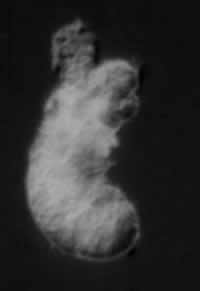 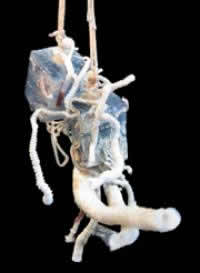 UNIVERSITY PARK, Pennsylvania -- Giant tubeworms found near hydrothermal vents more than a mile below the ocean surface do not bother to eat: lacking mouth and stomach, they stand rooted to one spot. For nourishment, they rely completely on symbiotic bacteria that live within their bodies to metabolize the sulphurous volcanic soup in which they both thrive.

But the microscopic larvae of these giants are born bacteria-free, with a complete digestive system. Juveniles swim, hunt, and eat before permanently settling down and taking up with their microbial partners. Now the idea that the larvae acquire their symbionts by eating them has been overturned. By collecting the giant worms' tiny spawn from traps laid on the ocean floor, oceanographers have shown that the sulfur-eating bacteria infect the larvae through their skin.

Andrea Nussbaumer and Monika Bright of the University of Vienna, and Charles Fisher, professor of biology at Penn State, report their findings this week in the British journal Nature.

Previous groups had shown that, after a larva quits swimming and attaches itself to the bottom of the ocean near a volcanic vent, its mouth disappears and its stomach shrinks away, even as it grows a specialized organ called the trophosome that houses the symbiotic bacteria it collects. "It is an absolutely obligate symbiosis for the worm," Fisher explains. "If the larvae do not get the right symbiont, they die."

The prevailing hypothesis was that the appropriate bacteria were gathered into the stomach during feeding, somehow escaped digestion, and by remaining in the stomach caused it to undergo metamorphosis into the trophosome.

But those conclusions were based on a very small set of observations, due to the extreme difficulty of obtaining the tubeworm's larval and juvenile stages. The only way to collect these delicate organisms is directly from the ocean floor, at 2500 meters depth, in the deep sea vehicle Alvin. Bright invented "tubeworm artificial settlement cubes," or "baby traps" as the team calls them, to collect young, just-settled larvae and juveniles. They left the traps at the bottom near an active hydrothermal vent and returned the next season to collect them, bring them back to land-based laboratories, and analyze them carefully using molecular techniques and fluorescence- and electron microscopy.

By a painstaking reconstruction of electron micrographs of thin slices of larvae and juvenile worms, the team showed that the symbionts do not enter through the mouth, but through the skin, in a process akin to infection by pathogenic bacteria. These bacterial partners then crawl inward, through various larval tissues, not to the stomach but to an adjacent, "mesodermal" tissue. Upon their arrival, the bacteria appear to induce the immature mesodermal tissue to differentiate and form the trophosome, where they proliferate and provide sustenance to the growing worm indefinitely. In return the bacteria get a safe habitat and a reliable source of food.

"The symbiont, and only the symbiont, is capable of invading the skin of the tubeworm larvae. It migrates through several layers of tissue towards the interior of the host, and into the future trophosome," Bright explains. "Once the trophosome is established, infection ceases, and no further infection appears to be possible at later stages."

The researchers found that after the trophosome is established, further infection appears to be prevented, in part by a wave of programmed cell death in tissues where straggling bacteria remain.