Groups Urge Kiwis to Halt Bottom Trawling; 'There is No Need to Wait' 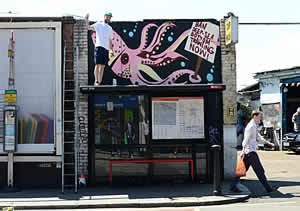 LONDON, England -- Today, while the Council of European Fisheries Ministers is meeting in Brussels, six renowned street artists will perform live and simultaneously across Europe to call on Member States to take the will of European citizens into consideration and to adopt a historical and indispensable measure to safeguard the oceans: the ban of deep-sea bottom trawling.

Deep-sea bottom trawling has been recognized as the most destructive fishing method of all: it is the marine equivalent of giant bulldozers smashing corals thousands of years old and reducing bottom habitat to rubble. The nets pull up anything in their path, including large numbers of endangered fish such as deepwater sharks.

Over 300 international scientists have called on European policymakers to adopt the ban of deep-sea bottom trawling, which was proposed by the European Commissioner of Fisheries Maria Damanaki in July 2012. But nations such as France and Spain have been gutting the deep-sea fishing regulation in order to protect a few industrial, heavily subsidized vessels, which are often unprofitable and whose economic and ecological model belongs to the past.

France, Spain, and the few nations they have managed to convince to block the ban of deep-sea bottom trawling thus oppose the will of more than 860,000 European signatories to the BLOOM petition who want to see this destructive and unsustainable fishing practice come to an end. The surprise comes from the UK, which supports France on opposing the ban although French and Spanish vessels thoroughly trawl off its own coast.

"France and Spain both fail at protecting the common interest in this case. They echo the vested interests of a few powerful industrial lobbies, ignore the will of citizens, and use their master knowledge of political procedures to jeopardize the gear ban although everything is arguing in its favor: science proves the utter ecological disaster of deep-sea bottom trawling, economic analyses show the appalling performance of these fuel-greedy, subsidy-dependent fishing vessels, and last, civil society refuses the destruction of a unique natural heritage for a handful of fish that nobody cares about" explained Claire Nouvian, founder of BLOOM.

"French and Spanish officials even dare talk about "sustainable" deep-sea bottom trawling! This is an insult to reason and to science", concluded Claire Nouvian, who called on the Italian Presidency and on Germany to ensure that the ban would be adopted at Council.

As current holder of the European Union Presidency, Italy has a great opportunity to promote an ambitious reform for the safeguard of the deep ocean and to act as a leader for the deep-sea bottom trawl ban. Together with Germany, which has championed the Common Fisheries Reform, Italy can ensure a truly sustainable future to the European fishing sector by steering it clear from destructive and unsustainable practices.

On July 14, the European street art community will directly express its indignation as well as its hopes and expectations to European governments. The Italian Presidency has requested EU Member States to confirm their position on the deep-sea fishing regulation by July 15.

N.B : The street artists which team up with BLOOM for the simultaneous performance: Â· PANIK in London (Kentish Town) Â· POPAY in Brussels (Robert Schuman round-about in front of the Ministers Council) Â· JB ROCK in Rome (In front of the Ministry of Agriculture and Fisheries) Â· SP38 in Berlin (Stattbaden in Wedding) Â· SPOK BRILLOR in Madrid (Utopicus, Calle Colegiata) Â· David 'JAE' Antunes in Lisbon (PraÃ§a do ComÃ©rcio) Â· DELWOOD in Biarritz - France