Scientists Rush To Examine Seafloor Off Chilean Coast Following Earthquake; 'This Is A Unique Case' 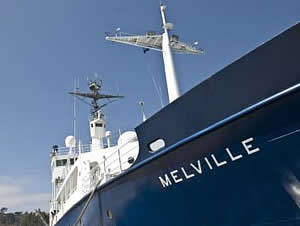 SAN DIEGO, California -- Scientists from Scripps Institution of Oceanography at UC San Diego will explore the earthquake rupture site of the Feb. 27 massive 8.8-magnitude Chilean earthquake, one of the largest earthquakes in recorded history.

Scripps scientists hope to capitalize on a unique scientific opportunity to capture fresh data from the momentous geological event by attempting to characterize structural changes in the seafloor that resulted from movement along faults and submarine landslides. The "rapid response" expedition, called the Survey of Earthquake And Rupture offshore Chile, or SIOSEARCH (www.siosearch.com), will use Scripps' research vessel Melville, which was conducting research off Chile when the earthquake struck.

"Regarding the genesis of a tsunami, scientists want to know if it was caused by direct uplift of the seabed along a fault or by slumping caused by shaking of sediment-covered slopes," said Dave Chadwell, a Scripps research geophysicist and chief scientist of the expedition. "We hope to address this by looking for disturbances in the seafloor, including changes in the reflectivity and possibly the shape by comparing previous data and the new (rapid response) data."

An important aspect of the rapid response mission will involve swath multibeam sonar mapping of the seafloor to produce detailed topographic maps. These digital data can be quantitatively compared to pre-quake data taken by scientists at Germany's Leibniz Institute of Marine Sciences (IFM-GEOMAR).

The rapid response cruise is possible because the Scripps vessel Melville is currently in Chilean waters. A Scripps-led team has been conducting an investigation of the geology and biology of the Chilean margin (see INSPIRE Chile Margin 2010 research cruise log entry by Scripps Professor Lisa Levin, "Marine Science in Chile Shaken:" http://oceanexplorer.noaa.gov/explorations/10chile/logs/mar9/mar9.html).

"This is a unique case in which we have the shipboard assets, the scientific agenda and the funding all in place. The earthquake was a tragedy for the people of Chile, but we hope this opportunity enables important new discoveries that can help us plan for future events," said Bruce Appelgate, associate director for Ship Operations and Marine Technical Support at Scripps.

The logistical details of undertaking the expedition are enormous and constantly evolving due to the uncertainty regarding transportation infrastructure in Chile. Port facilities in ValparaÃ­so are limited due to widespread earthquake devastation, making fueling and provisioning the ship difficult.

After the in-progress cruise (INSPIRE Chile Margin 2010) concludes on March 17 in ValparaÃ­so, Chadwell and Scripps researcher Peter Lonsdale, along with graduate student researchers Jared Kluesner and Ashlee Henig, and Scripps Geological Data Center analyst Aaron Sweeney, will board Melville to begin an eight-day expedition to cover the earthquake rupture area with a seafloor mapping system. Chadwell, along with Scripps researchers Mike Tryon and Mark Zumberge, are preparing to deploy depth sensors on the seafloor to record possible abrupt vertical motions over the next year.

The American scientists will be joined by Chilean researchers Juan DÃ­az and Matias Viel GonzÃ¡lez from Universidad CatÃ³lica in ValparaÃ­so as well as scientists from IFM-GEOMAR. Several years ago IFM-GEOMAR researchers conducted a detailed multibeam mapping survey off Chile and their data will be valuable for comparisons with the new survey to expose changes brought by the Feb. 27 earthquake rupture.