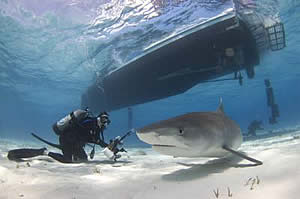 A new study says a single shark could be worth more than $200,000 using a conservative 15-year life cycle. Credit: Austin J. Gallagher

MIAMI, Florida -- Shark populations over the last 50 years have decreased dramatically. From habitat degradation to overfishing and finning, human activities have affected their populations and made certain species all but disappear.

A new article in Current Issues in Tourism by Austin J. Gallagher and Dr. Neil Hammerschlag of the R.J. Dunlap Marine Conservation Program at the University of Miami study the impact of these apex predators on coastal economies and the importance of including conservation efforts in long term management plans.

The team collected data from a total of 376 shark ecotour operations across 83 locations and 8 geographic regions. Oceania, The Greater Caribbean and North America ranked at the top for highest proportion of different locations offering shark tour services, and the Bahamas alone contained over 70% of all shark ecotourism in the Greater Caribbean and generated over $78 million in revenue in 2007. The Maldives saw similar numbers, and in 2010 banned shark fishing due to shark-based ecotourism contributing and estimated >30% towards their GDP.

"We know that for many countries, sharks are an important piece of the economy -- in this study we wanted to examine their value as a recreational resource in a new and refreshing way by taking a global perspective," said Gallagher.

"It makes total economic sense for us to protect these resources, whether you are in charge of a coral atoll somewhere in Indonesia or working off the coast of New Englandâif the sharks can remain, the divers will follow and livelihoods can flourish."

According to the study, a single reef shark could be valued at $73 a day alive, as opposed to the one-time value of a set of shark fins used for shark fin soup at $50. Over the course of that same shark's life, it could be worth more than $200,000 using a conservative 15-year life cycle. The study also documented trends by species, and found that reef sharks and whale sharks are among the most well-represented in the ecotourism industry.

"Our study clearly shows that, economically speaking, sharks are worth more alive than dead; however, sharks are also ecologically important, helping maintain the balance and health of our oceans," says Hammerschlag.

Sharks reproduce very slowly, so even modest amounts of fishing can negatively impact local populations. But with appropriate conservation policies, sharks can begin their recovery, a road that could be both enjoyable and profitable through ecotourism.

"After the 1975 release of the movie JAWS, the general public felt that 'the only good shark was a dead shark,' however in the thirty years that have followed, this mentality has changed. A growing number of people are turning their fear into fascination and want to continue to see sharks in the wild," said Hammerschlag.