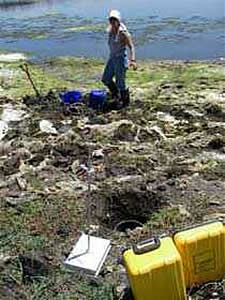 For the first time, scientists detect a highly toxic form of mercury in groundwater flows at two coastal sites in California.

The UC Santa Cruz researchers who led the NOAA California Sea Grant-funded project believe these flows represent a significant and previously overlooked source of mercury in the nearshore marine environment.

In an article to appear in Environmental Science and Technology, scientists report that submarine groundwater flows at Stinson Beach in Marin County and Elkhorn Slough in Monterey County inject about as much total mercury into coastal waters as that falling out of the sky locally through atmospheric deposition.

More importantly, groundwater appears to contain relatively high levels of methylmercury, the highly toxic form of mercury that accumulates in the marine food chain and poses a public health problem in most regions of the world, according to the Madison Conference Declaration on Mercury Pollution.

"What makes this project interesting is the idea that methylmercury is forming in coastal groundwater," says Cynthia Gilmour, a microbial ecologist and senior scientist at the Smithsonian Environmental Research Center in Edgewater, Md. "We don't know very much about the sources of methylmercury to coastal waters. It is a hot topic."

The findings, however, are consistent with "a growing consensus that coastal fishes are acquiring mercury from methylmercury produced in the coastal zone," Gilmour says.

"The big question for public health is, 'Where is all the mercury in seafood coming from?'" says coauthor Russell Flegal, a professor of environmental toxicology at UC Santa Cruz. "What we have shown is that methylmercury is coming from groundwater in California at surprisingly high levels."

On a global average, the amount of mercury falling out of the sky has tripled since the Industrial Revolution 200 years ago, due primarily to the burning of fossil fuels. "As a result, most mercury today enters most landscapes through atmospheric deposition," Gilmour says. This mercury is converted into methylmercury by sulfur- and iron-reducing bacteria, which reside in wet, low-oxygen soils and sediments.

"People have assumed that methylmercury must come from the bottom of the ocean or from surface waters flowing to the coast, but never from groundwater," says UC Santa Cruz biogeochemist Adina Paytan, also a co-author.

The scientists did not attempt to identify the sources of mercury in groundwater. But, Frank Black, a former doctoral student at UC Santa Cruz, now a postdoctoral researcher in biogeochemistry at Princeton University and the paper's lead author, believes that some of the inorganic mercury is coming from natural processes such as weathering of local mercury-containing rocks. Mining and other human activities are also sources of mercury in soils and sediments.

In terms of understanding where inorganic mercury is converted into methylmercury, Black believes that septic tanks in the vicinity of Stinson Beach, because they provide nutrients to methylmercury bacteria, may be contributing to methylmercury formation. At Elkhorn Slough, the leading theory is that groundwater is flushing out methylmercury from sediments where it is being produced.

In addition to Black, Paytan and Flegal, the coauthors of the paper include Karen Knee and Nicholas de Sieyes of Stanford University and Priya Ganguli and Ellen Gray of UC Santa Cruz.