Lawsuit Launched To Protect Endangered Whales From Gulf Of Mexico Oil Exploration; 'The Feds Are Still Violating The Laws'

Scientists Studying Britain's Last 'Resident' Orca Pod; 'No Youngsters Have Been Seen For Such A Long Time' 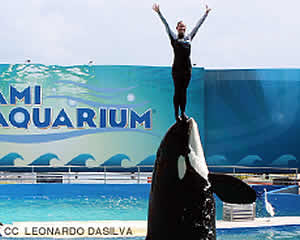 Armed with testimony from expert biologists, a veterinarian, and a former orca trainer, the plaintiffs argue that holding Lolita the orca without the company of any others of her kind, with incompatible animals, and in a cramped tank with no protection from the hot sun is an unlawful "take"âthat is, that she is being harmed, harassed, and/or woundedâin violation of the ESA. But a federal judge ruled that ESA violations only occur when a protected captive animal's survival is "gravely" threatenedâa ruling that the plaintiffs argue is unprecedented and dangerously narrow.

"This endangered orca should not have to face life-threatening harm to have legal protection under the Endangered Species Act," says PETA Foundation Director of Animal Law Jared Goodman. "The Endangered Species Act prohibits harming and harassing protected animals like Lolita, who is suffering in the Seaquarium's tiny tank, and that's exactly the point that PETA will make to the appellate court."

"Thankfully, keeping animals in captivity for entertainment purposes is becoming less and less acceptable to the American publicâwith even SeaWorld publicly announcing the end of the captive orca breeding program and asserting it will acquire no new orcas," says Animal Legal Defense Fund Executive Director Stephen Wells. "The Animal Legal Defense Fund will continue to fight for Lolita and other animals suffering in captivity for the sake of entertainment."

PETA, the Animal Legal Defense Fund, Orca Network, and countless concerned advocates have pushed for years for Lolita to be retired from performing and transferred to a seaside sanctuary that's waiting for her in her home waters off Washington's San Juan Islands, where she could interact with her family pod, from whom she was stolen more than 45 years ago.