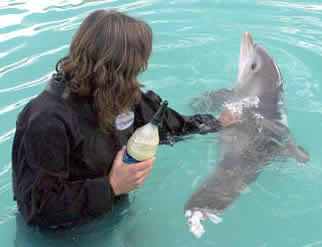 Winter swims without tail fin. Rescued off Florida, the dolphin may soon have an artificial tail

CLEARWATER, Florida -- Winter, a 10-month-old Atlantic bottlenose dolphin, might soon have a rare operation. She may get an artificial tail.

Last December, marine biologists found her tangled in a crab trap line in the Mosquito Lagoon near Cape Canaveral that resulted in the loss of her entire tail and almost took her life.

Now, Winter is being cared for at the Clearwater Marine Aquarium where officials are looking for donations to help pay for the $100,000 operation. Because she's just a baby, Winter would likely need three or four new tails throughout her lifetime. More information about donation is available by calling 727-441-1790, ext. 240.

Unable to swim quickly or jump out of the water like other dolphins, doctors worry her unusual movements could cause back problems later on or even shorten her life. So scientists are looking for a way to build an artificial tail prosthesis, like the one made for a Japanese dolphin named Fuji back in 2004.

"There have only been two others in the world to develop a prosthetic tail," said Diane Mitchell, animal care director at the aquarium. "And there is no other case like Winter because those other dolphins all had part of a tail."

Mitchell said officials are not sure how Winter got stuck, but when she was found she was by herself.

"Her mother was not with her," Mitchell said. "And the line was stuck around her like a rubber band where it cuts off all your circulation. By the time she came to us her whole tale was white and a lot of the tissue had died. We were left with a 2-month-old baby with absolutely no tail."

Nine months later, Winter has made a full recovery, and is learning to swim and even play, without the use of her tail.

"Instead of swimming up and down, she actually swims like a shark from side to side, because that's where she gets the most momentum from," Mitchell said.