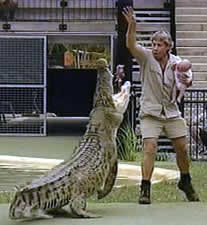 SYDNEY, Australia -- Feminist academic Germaine Greer said on Wednesday she hoped the death of Australian "Crocodile Hunter" Steve Irwin would mark the end of what she called exploitative nature documentaries, a discordant note amid floods of tributes.

Irwin died in a freak diving accident off Australia's northeast coast on Monday after he was hit in the chest by the serrated barb from a stingray's tail.

Echoing comments she made this week in the Guardian, Australian-born Greer likened Irwin to a lion tamer and said he had intruded on the habitats of animals and treated them with "massive insensitivity".

"It's no surprise that he came to grief," Greer told Nine Network television.

"We now have enough respect for lions to be embarrassed if we see someone trying to crack whips at them and wave chairs at them. Jumping all over crocodiles is the same kind of thing."

Greer, an award-winning author, is a frequent critic of personalities like football star David Beckham and social trends like reality television.

Irwin's death has prompted outpourings of grief and sympathy from around the world, dominating local newspapers and clogging Internet news sites.

His "Crocodile Hunter" documentaries for U.S.-based television company Discovery Channel's Animal Planet were seen by tens of millions of viewers around the world.

He became famous for flirting with death as he wrestled crocodiles, swam with sharks and handled some of the world's deadliest snakes and spiders.

Greer said she found the Irwin phenomenon "embarrassing", although she understood the sadness at his death.

"I'm not saying that's not sad, I'm saying what might be over now is this kind of exploitation of animals," Greer said.

"I am sick and tired of programmes that tell me that the world is full of wicked, nasty, powerful, deadly creatures. Why does Australia set itself up to be made into this hellhole?" she said.