Disappearing Dolphins: Is The West Coast Of Scotland Getting Too Hot To Handle?

Tasmania: Last Whale Dies After West Coast Mass Stranding; 'We Did Everything Possible' 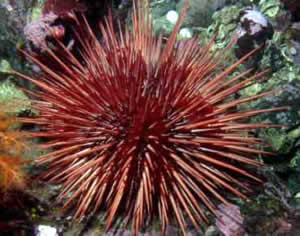 SAN DIEGO, California -- Despite having one of the longest larval periods of any of the common marine invertebrates, red sea urchins appear genetically differentiated along the west coast of North America. It is the first time scientists have detected any population structure in the species.

Marine biology professor Ron Burton of the University of California at San Diego and former graduate student Celeste Benham analyzed 500 adult urchins from San Diego, Los Angeles and Mendocino counties across five microsatellite markers and then compared the genetic patterns to an existing, similar database of 1,400 urchins from British Columbia.

The genetic signatures strongly suggest that California and British Columbia urchins are not connected via larval dispersal and therefore comprise two distinct populations, the scientists report.

“The take-home message of this study is that if you use more markers and newer techniques you will find some population differentiation that before nobody found,” Burton says, referring to past studies that used fewer genetic markers and detected no population genetics structure in the species across large swaths of its range.

"From my evolutionary perspective, our results are important because they imply that, even on long time scales, there is no mixing," he says. "This means there is at least the potential for populations to adapt to different ocean conditions and gradually diverge. This is the first step in the two populations potentially becoming different species.”

The larval period of red sea urchins can exceed two months, compared with about a week, or less, for some species of abalones, chitons and limpets.

"The idea has been that ocean currents must be mixing urchin larvae all over the place," says Benham, now a research assistant at the marine mammal laboratory at Hubbs-SeaWorld Research Institute in San Diego. "But, there is more going on out there."

Genetic tests show, for example, that "recruits" (urchins younger than 2 years old) from the Point Loma kelp bed in San Diego are not solely the offspring of nearby adults.

The next step in understanding larval connectivity is to begin binning DNA tissue samples by age, which roughly correlates with urchin size, she says.

Why is this key?

Adult urchins may reach the age of 100. Genetic analyses that don't take into account the span of ages of a set of DNA tissue samples could be averaging larval dispersal patterns over a century.

"We have been studying genetic differentiation at very low resolutions," Burton says.