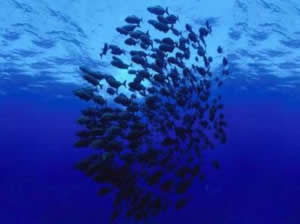 Line drawings and images of tropical eastern Pacific shore fishes, such as this photo of Uraspis helvola, are easy to find and download. Credit: Ro

Non-scientists can easily identify fish species using common name searches, or a tool that allows entry of information on a fish's location, shape and color. Each species' page includes text descriptions, photographs and maps of occurrence range. Highlighted text indicates salient features that distinguish one species from other. People can compare images of similar species, and immediately download photos. If there are photo-usage restrictions, contact information is provided.

This is the most complete record of the geographic distributions and biology of an entire fauna of shore fishes in a single database for any biogeographic region in the world, according to Robertson, who wrote the book, Fishes of the Tropical Eastern Pacific, with Gerald R. Allen, in 1994. After the book was published, Robertson received funds from the Smithsonian's Women's Committee to create an interactive CD. Support from the Smithsonian Marine Science Network paid for the programming and development of this online system.

Maps can be generated in color or in black and white. Geographic range size can be calculated on the basis of pixels, which represent 4-kilometer by 4-kilometer areas, or by using point-of-occurrence records. Robertson checks all location reports and deletes likely wild cards, creating a much more accurate reference than global databases based on unchecked published reports. He works closely with other researchers and with fishermen who send photos of unusual catches, some of which result in new points on the map, and better photographs showing diagnostic features.

Database queries in the system generate lists of fish by reserve, by island, by country and using templates of different areas to filter results. Because of the enormous quantity of information, the use of area templates with predetermined faunas greatly speeds up comparative searches. It is possible to list species endemic to an area, species that likely occur in an area based on larger range maps, and species whose occurrence is confirmed for that same area, based on occurrence site records. Maps can also be generated that show the richness of the entire fauna or of different types of species in different parts of the region.

"You can see which areas have been well sampled and which areas still need to be studied. Mapping species richness and determining local endemism makes it much easier to decide where to locate reserves," said Robertson. The International Union for the Conservation of Nature recently organized two workshops using the geographic databases in this online system to examine the entire regional fauna and determine which species should be included in different categories of their Red List of endangered species. Previously, this was done based on incomplete lists of taxa rather than with a regional fauna.

The system has full capabilities in English and Spanish to enhance its accessibility in the 10 countries that span the region: Mexico, Guatemala, El Salvador, Honduras, Nicaragua, Costa Rica, Panama, Colombia, Ecuador and Peru. The Smithsonian Latino Initiatives Fund contributed to the translation.

In addition to yearly updates of this system, Robertson will soon complete a similar online system for Caribbean shorefishes and then for the coastal fishes of Venezuela. The Smithsonian Tropical Research Institute, headquartered in Panama City, Panama, is a unit of the Smithsonian Institution. The institute furthers the understanding of tropical nature and its importance to human welfare, trains students to conduct research in the tropics and promotes conservation by increasing public awareness of the beauty and importance of tropical ecosystems.