California Divers Thrilled by Large Schools of Giant Sea Bass; '15, 20 Fish is Unheard of Together'

Research: Certain Individual Fish in Schools Have Greater Influence When Fleeing from Predators 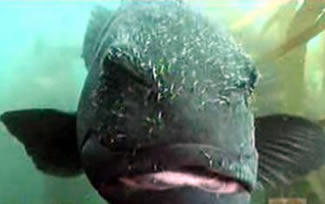 California divers were thrilled by a large school of sea bass

Divers are always looking for that special moment underwater, the one they can savor. In the waters off La Jolla Cove, that moment has arrived. Giant sea bass started showing up about two weeks ago, but we’re not talking one or two.

“Every once in a while, you’ll see one out here off La Jolla, but nothing like this many fish – 15, 20 fish is unheard of together so tightly spaced,“ said diver Roger Bly.

Roger got a hold of us through Your Stories about the giant sea bass, and today was the day. But with visibility down and the swell up, we only had about a 50-50 chance of finding them.

“I didn’t have a lot of hope that we were going to see them today, because the visibility was pretty bad, so we got lucky finding sea bass today,“ Bly said.

Seeing the great creatures return to La Jolla Cove is an incredible sight, especially in these numbers. And it’s no coincidence that it’s in the underwater reserve in La Jolla.

“We’re lucky to have this kind of reserve off La Jolla, where you can see this sort of thing,” Bly said. “Not just the giant sea bass, we saw schools of mackerel, I saw some yellow tail, a shark – we saw lots of stuff out here.”

The giant sea bass we saw today ranged between 75 and 125 pounds, with the biggest bass well over 150 pounds.

These magnificent fish are as gentle as they are big, and will allow an up close look. With winter right around the corner, this is a rare chance to get a glimpse at what the waters off our coast may have been like 50 years ago.