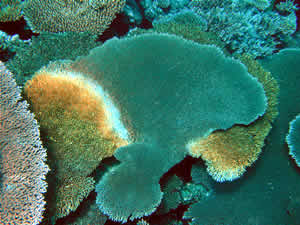 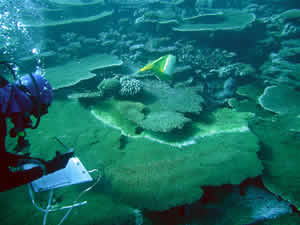 A diver inspecting the progress of the White Syndrome

Worldfirst research at 48 reefs spread along 1500 kilometres of the GBR combined with 6 years of satellite data on sea temperatures has revealed “a highly significant relationship” between ocean warming and the emergence of a disease known as white syndrome.

White syndrome is one of a number of unexplained coral diseases which scientists have observed to be on the increase globally in recent years.

The team led by Dr John Bruno of the University of North Carolina, Dr Bette Willis of the ARC Centre of Excellence for Coral Reef Studies and James Cook University and Dr Hugh Sweatman of the Australian Institute of Marine Science has published an open access report on their findings in the Public Library of Science (PLoS) Biology on the internet.

“Coral reefs have been decimated over the last several decades on a global scale. Infectious diseases are thought to contribute to this mass coral mortality in reef regions like the Caribbean, and many reef ecologists suspected that high ocean temperatures were a key factor in the increased incidence and severity of disease outbreaks, Dr Willis says.

“This hypothesis was supported by local observations—for example, that some coral diseases become more prevalent in the summertime—but had never been tested before at large spatial scales or over relatively long periods.

The team decided to test the temperature/disease theory by combining 6 years of disease survey data from reefs across 1,500 kilometers of Australia’s Great Barrier Reef with new ocean temperature records from satellite measurements.

Counts of diseased corals are a part of AIMS’ long-term program to monitor the state of the GBR. The program surveys sites on inshore, mid-lagoon and outer barrier reefs from Cooktown and Lizard Island in the far north to the Capricorn-Bunker group of islands at the southern end of the GBR.

“Our results indicate that major outbreaks of the coral disease white syndrome only occurred on reefs with high coral cover after especially warm years. The disease was usually absent on reefs with lower coral cover or in cooler years,” Dr Willis says.

In 2002, when sea temperatures were especially warm and a major bleaching event affected up to half the area of the GBR, there was a 20-fold upsurge in coral disease, notably on reefs with high coral cover.

The researchers speculate the disease may be due to a combination of the corals becoming stressed by high water temperatures, and an increase in virulence in the organisms which attack them.

“Our results suggest that climate change could be increasing the severity of disease in the ocean, leading to a decline in the health of marine ecosystems and the loss of the resources and services humans derive from them,” the team says.

The GBR is estimated to contribute $5.4 billion and 68,000 local jobs to the Australian economy, while worldwide coral reefs support more than 200 million people.

“Understanding the causes of disease outbreaks will help in the development of strategies to protect reef-building corals,” Dr Willis says. “In the past, apparently pristine reefs with high coral cover were thought to be the most resilient reefs. Knowing that they may be particularly vulnerable to disease outbreaks highlights the need for caution when it comes to permitting activities that add additional stress, especially during times of high temperatures.

Dr Sweatman adds ”While we become aware of more diseases of reef organisms each year, their impact on reefs of the GBR has been limited so far. The crown-of-thorns starfish has had a much greater impact than coral diseases in recent years, but the new finding shows the need for research into diseases and monitoring of their effects.”

“More diseases are infecting more coral species every year, leading to the global loss of reef-building corals and the decline of other important species dependent on reefs” says lead author Dr John Bruno. “We’ve long suspected climate change is driving disease outbreaks. Our results suggest that warmer temperatures are increasing the severity of disease in the ocean.”