Landlocked North Dakota Oceanographer Is No 'Fish Out Of Water' 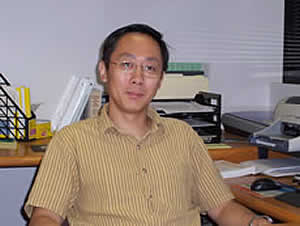 Xiaodong Zhang, an associate professor in earth systems science and policy at the University of North Dakota

GRAND FORKS, North Dakota -- Can an oceanographer in the middle of the North American continent find happiness studying a flooding freshwater lake in landlocked North Dakota?

According to Xiaodong Zhang, an associate professor in earth systems science and policy at the University of North Dakota, the answer is a resounding "Yes!"

"I'm at the geographical center of the continent, which is equal distance from all the major oceans and the Gulf of Mexico," said Zhang, who has a Ph.D. in oceanography. "It's perfect because I can study any ocean I like."

While Zhang continues to study oceans, these days much of his work focuses on the expansion of Devils Lake 90 miles west of Grand Forks, N.D. and the seemingly intractable problems it's created. The lake has risen nearly 32 feet since 1993, increasing in volume by seven times and in area by nearly five times (261 square miles). It has inundated prime farmland, forced towns to relocate, and required government to spend more than $1 billion on flood mitigation projects.

"When I looked at doing research," Zhang said, "I found that much of the current research lacks a rigorous study of the hydrological properties of not only the lake, but also of the entire Devils Lake Basin.

How high? "We developed a hydrological model to study the rainfall and the runoff of the entire basin, instead of just the lake itself," he explained. "We combined that model with NASA data and future climate predictions to see what the future looks like for Devils Lake. If the lake is still rising, how high will it go?"

While Devils Lake is considered a freshwater body, its water is relatively salty because it's a terminal lake, which means that water flowing into the lake normally has no natural outlet. Evaporation causes the salts to concentrate, which makes the lake more saline than water in the surrounding environment.

The thorny question of what to do with the lake's saline water has raised controversy locally, regionally and internationally. The state built an outlet that drains Devils Lake water into the Sheyenne River, which flows into the Red River of the North and then into Canada. It plans to build an even larger outlet next year. If the lake rises another four feet to 1,458 feet above sea level, it will naturally overflow from adjacent Stump Lake into the Tolna Coulee and then into the Sheyenne River, an event geologists say has occurred twice in the past 4,000 years.

When Zhang came to UND in 2002, he wanted students in his class on hydrological cycles to understand how their lessons could be applied to everyday issues. Devils Lake was a natural fit.

"I invited one group from Devils Lake to talk to the class about how they were affected by the flooding," he explained. "I also invited people who lived downstream along the Sheyenne River to talk about why they didn't want the water discharged into their river. It gave the students two different perspectives, which got me really interested."

Measuring water changes In September under a NASA-funded project to monitor the lake's water quality, Zhang and his students deployed a buoy that continuously measures water temperature, salinity, turbidity (cloudiness or muddiness), dissolved oxygen level and chlorophyll concentration, in addition to weather information. The buoy is in the Stump Lake portion of Devils Lake where the water quality is typically lowest.

"By monitoring water quality, we hope to have a better understanding of how it's changing and what factors could cause that change," he said. "We'll better understand how the quality of water changes in response to the weather and long-term climate changes."

Zhang is studying these issues in collaboration with two other UND researchers on NASA-funded projects. Andrei Kirilenko, an associate professor who works with Zhang in the Center for People and the Environment, examines the potential impact of future climate change on the lake. Yeo Howe Lim, associate professor of civil engineering in the School of Engineering and Mines, uses calibrated hydrologic computer modeling to predict whether the lake is likely to rise, fall or remain at its current level.

Lim specializes in water resource engineering and is using a variation of a U.S. Army Corps of Engineers hydrological model to determine the probability of different scenarios occurring. Using NASA data on Devils Lake, the computer model will be run a million times to determine which scenarios are more likely.

"If there's a high probability of the lake going higher, then we really have to do something," Lim said. "But the economics of additional measures become questionable if we have to protect against a 5 percent chance event above the current water level."

Kirilenko has also been involved in research on climate change impacts on the watershed of the Aral Sea in Central Asia â which has been shrinking since the 1960s â and considers Devils Lake as a natural extension of his work.

"From my perspective, the interesting part is: what are the future prospects for the hydrology in Devils Lake watershed in relation to the possible changes in climate?" he asked.

"Devils Lake is an extremely interesting site for study because the impacts are large, but they're regional. The simulations for climate change are usually done on a very coarse scale of around 200 by 200 miles. We have a much smaller watershed, so there's a need for downscaling."

With the North Dakota winter approaching, Zhang had to deal with a problem that oceanographers who use research buoys don't face: removing the buoy before the lake freezes or risk having it destroyed by ice.

"Normally, when we put a buoy in the ocean we don't bring it back; we leave it out there," he laughed. "I've never dealt with this before. How do I bring it back? The buoy's a round thing. There's no handle."

It's just another challenge for an oceanographer in North Dakota.