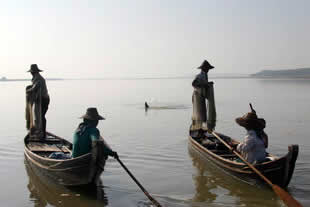 RANGOON, Burma -- The government of Burma has established a protected area for, of all things, a partnership between fishermen and a small, gray beakless dolphin with a knack for herding fish into nets, according to the Wildlife Conservation Society (WCS). Specifically, some 70 kilometers of the Ayeyarwady River have been protected to safeguard the cooperative fishery. It also supports one third of the river’s population of Irrawaddy dolphins, a species that is threatened throughout much of its coastal and freshwater range.

"This is a big step forward toward saving this cetacean in the Ayeyarwady River and the fishery that benefits both humans and dolphins," said WCS researcher Brian D. Smith, who has conducted research on the species in the region for several years. "Balancing the protection of a critically endangered wildlife population with local livelihoods and preservation of a unique cultural tradition is a win-win situation for all."

The fascinating partnership involves fishermen summoning the dolphins to voluntarily herd schools of fish toward the boats and awaiting nets. With the aid of the river-dwelling dolphins, the fishermen can increase the size of their catches by threefold, and the dolphins appear to benefit by more easily preying on the cornered fish in both nets and on the muddy banks of the river.

The Irrawaddy dolphin grows to some 2 to 2.5 meters in length (6.5 to 8 feet) and frequents the coasts, estuaries, and freshwater lagoons of Southeast Asia. It is threatened throughout its range by incidental catches and in several areas by habitat degradation.

The dolphin population in the Ayeyarwady River is one of the most threatened, specifically by electrocution from illegal electric fishing and entanglement in gill nets, and from mercury poisoning and habitat loss from gold mining operations in the river. Recent surveys of the river conducted by the Department of Fisheries and WCS found that the species range had declined by some 60 percent, and that only 59 to 72 individuals remained in a region some 1000 kilometers from the sea. In response to these findings, the World Conservation Union (IUCN) designated the population as “critically endangered."

The new protected area will boost awareness about the Irrawaddy dolphin and its unique role in the river’s livelihoods, as well as enforce the prohibition of electric fishing, gold mining, and other threats, and initiate a systematic monitoring program for the species. Another positive development is a recent ban on gold mining in the Ayeyarwady and a recent survey conducted by WCS and the Burma Department of Fisheries found that the ban had been 100% effective on eliminating this threat from the river.

"If the protected area proves successful at conserving dolphins and enhancing the livelihoods of local fishermen, it could be used as a model for extending similar protection to other river segments," added U Mya Than Tun, Senior Scientist with the Burma Department of Fisheries.