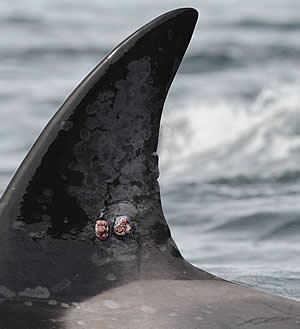 Serious wound on the dorsal fin of a transient killer whale after satellite tagging. credit Raincoast 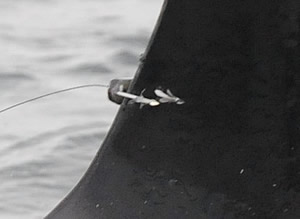 An improperly deployed tag where one of the two barb penetrates the entire thickness of the dorsal fin. creidt Raincoast

SIDNEY, British Columbia -- A plan to tag the endangered southern resident killer whales that ply both sides of the international boundary between Canada and the USA is meeting with growing opposition, now on the Canadian side of the border. Despite efforts between Canada and the United States to develop a coordinated strategy for the recovery of these endangered whales, a unilateral decision was made by the US federal government (NOAA) to attach satellite tags to the bodies of resident killer whales.

"The nominal information that might be generated from deploying these invasive tags to the fins of endangered killer whales simply does not justify the risk of serious injury resulting from the tags" said Raincoast biologist Misty MacDuffee.

"Yes, we would all like to know more about the movement of killer whales, especially during the winter, but these tags are unlikely to provide that information on their own. This is a small, exceptionally vulnerable population of whales where the loss of individuals from any ensuing infection could have broader implications. The risk to individual and population health from this type of invasive research simply isn't worth it," said Raincoast science director Dr. Chris Darimont.

Information from the tags would provide data on location only, and only for the animal tagged, not necessarily the whole pod of whales, and for only the limited time the tag remains attached to the whale. These are long-lived animals that hunt for salmon up and down of coast North America. Having a snapshot of their position in these waters will not paint a picture of their ecology and biology over the lifetime (up to 100 years) of these animals.

"This information is meaningless on its own," said MacDuffee. "It wouldn't provide information on the depths they were feeding at, what they were feeding on, what their distribution was being driven by, or any of the context needed to make management decisions about food supply or critical habitat. This additional â and important -information would have to be gathered separately."

The attachment is designed to come off the whale on the basis of rejection by the animal's immune system. This can happen in as little as three weeks. Given that much longer seasonal and multi-year information is what researchers and managers on both sides of the border desire, this again risks the health of an individual whale with no certainty of useful information.

BC's southern resident killer whales are endangered because of chemical pollutions, noise and disturbance and declining salmon abundance. With a weakened immune system from pollution exposure, wounds (from tagging) can become more readily infected and lead to serious illness or death. Secondly, attaching the tags will increase stress and disturbance resulting from close following and harassment of the targeted whale and its pod members.

Raincoast has been a long standing advocate for, and practitioner of, non-invasive research methods; for example, our decade-long wolf study was done without collaring or capture of any wolves. There is plenty we have learned, and can continue to learn, by using non-invasive techniques and alternative strategies.