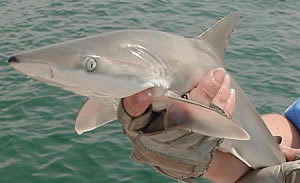 NOAA's Fisheries Service is proposing several measures to end overfishing and rebuild blacknose sharks and other shark populations. Nine public hearings will be held on the proposal, from New England to the Gulf of Mexico, in August and September.

"Our latest stock assessment found that the blacknose shark is depleted and the rate of fishing, both directed and incidental, is unsustainable," said Jim Balsiger, acting NOAA assistant administrator for NOAA's Fisheries Service. "Blacknose sharks are vulnerable because they bear few young. The proposed measures will help rebuild the species, an important part of the ecosystem in the south Atlantic, Gulf of Mexico and the Caribbean Sea."

The stock assessment determined that reducing the annual mortality of blacknose sharks by approximately 78 percent across all fisheries could result in rebuilding by 2027. To rebuild the blacknose shark population—named for the dusky blotch on the tip of their noses—NOAA proposes creating a separate blacknose shark quota. Until now, landings of blacknose sharks have been counted against the small coastal shark complex quota. The proposed annual quota would be 6,065 blacknose sharks, or 14.9 metric tons dressed weight (shark weight without head, guts and fins). An average of 27,484 blacknose sharks, or 62 metric tons dressed weight, were landed each year from 1999-2005. The separate quota is needed because this species is the only small coastal shark that has been determined to be fished at an unsustainable rate and have a depleted population.

An average blacknose shark grows to about 4 ½ feet, and is currently fished as a game fish by recreational anglers and are fished commercially for their meat, which is sold fresh or dried and salted. These sharks play an important role in the ocean ecosystem, helping control various fish populations.

To help rebuild the blacknose population, NOAA's Fisheries Service is also proposing to prohibit the landing of all Atlantic sharks with gillnet gear—the primary way blacknose sharks are caught—from South Carolina south, including the Gulf of Mexico and the Caribbean Sea. This gillnet fishery targets small coastal sharks, including blacknose.

The proposal also would add smooth dogfish to the species managed by the NOAA's Fisheries Service requiring a federal fishing permit and proposes an annual commercial quota of 645.8 metric tons dressed weight. Average reported landings of smooth dogfish are 431.3 metric tons dressed weight per year as reported through the Atlantic Coastal Cooperative Statistics Program from 1998 through 2007.

NOAA's Fisheries Service will also identify essential habit for smooth dogfish, a species that lives in coastal waters and ranges from Massachusetts to the Gulf of Mexico and Caribbean Sea. It is also caught for its meat and fins.

In addition, the proposal promotes the live release of shortfin mako sharks by commercial and recreational fishermen to help rebuild the species population in the Atlantic Ocean. The U.S. contributes less than 10 percent to the overall catch in the Atlantic. NOAA's Fisheries Service has proposed to take action at the international level to develop measures to end overfishing of the species.

For more information on the proposed action, the Federal Register notice, and for the list of public hearings, see http://www.nmfs.noaa.gov/sfa/hms.