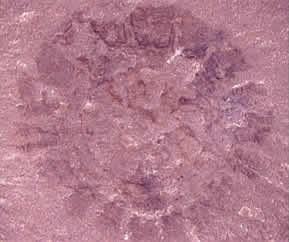 This jellyfish is more than 500 million years old, the oldest jellyfish in the fossil record to date. Credit: University of Kansas

The jellyfish are unique because they push the known occurrence of jellyfish back from 300 million to 505 million years.

The research will be published on October 31 in the journal PLoS ONE.

"This study clearly shows what paleontologists have long suspected--that jellyfish have a history that's much older than their known fossil record," said Patrick Herendeen, program director in the National Science Foundation (NSF)'s division of environmental biology, which funded the research through the Assembing the Tree of Life (AToL) program, along with NSF's division of earth sciences. "Adding some 200 million years to the age of jellyfish is quite a jump. What's even more surprising is the apparent diversity of jellyfish forms present at that time."

The researchers describe fossils preserving traits that allow them to be related to modern orders and families of jellyfish.

The jellyfish left behind a film in fine sediment that resembles a picture of the animal. Most jellyfish do not leave such a clear impression behind because they are often preserved in coarse sand.

"The fossil record is full of circular shaped blobs, some of which are jellyfish," said Paulyn Cartwright, an ecologist and evolutionary biologist at the University of Kansas (KU), one of the paper's authors. "That's one of the reasons the fossils we describe are so interesting, because you can see a distinct bell-shape, tentacles, and muscle scars."

Cartwright, Bruce Lieberman, a geologist at KU and senior curator of invertebrate paleontology at the KU Natural History Museum, and Jonathan Hendricks, a geologist at KU, collaborated on the research, along with scientists from several other institutions.

Lieberman said the jellyfish the group describes, found in Utah, offer insights into the puzzle of rapid species diversification and development that occurred during the Cambrian radiation, a time when most animal groups appear in the fossil record, beginning roughly 540 million years ago.

The fossil record has revealed much less about the origin and early evolution of soft-bodied animals such as jellyfish than it does about animals with hard shells or bones.

"The fossil record is 'biased' against soft-bodied life forms such as jellyfish, because they leave little behind when they die," Lieberman said. "That means we are still working to solve the evolutionary development of many soft-bodied animals."

With the discovery of jellyfish in the Cambrian, however, the researchers said that there is enough detail to assert that the types are related to the modern orders and families of jellyfish. The specimens show the same complexity. That means that either the complexity of modern jellyfish developed rapidly roughly 500 million years ago, or that the group is even older and existed long before then.