Volusia Country, Florida: Case Study Analyzes Why, Where And When Of World's Leading Shark Attack Site 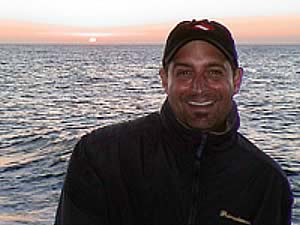 “We have code-named the site ‘Oceania,’” says Douglas. “Its exact location will be kept a closely guarded secret until the first productions have captured the complete story here”.

A limited number of production companies will be introduced to the site in 2010 (January through April), in order to maintain the location's pristine, untamed nature, as well as for the benefit of the white sharks. Typically, divers are encountering up to 10 animals a day in 100-foot visibility. The site enjoys a potential for strong conservation and research storylines. "This site offers the finest traditions of exploration, research, and adventure,” explains Douglas. “The fact that it is almost 2010 and sites like these are being discovered is a testament to how little we know of the oceans and the unlimited possibilities still open to us."

“You only discover new sites like this once every 10 years," says Douglas. "Expect to be blown away.”

“As a production company looking for the next great shark show concept, you need a professional, shark-centric company to assist with the development of your ideas," says Douglas. “This is what we do: pro-shark productions with an emphasis on shark research." For the past 8 years, Shark Divers’ parent company, Shark Diver, has been innovating and supporting ground-breaking Mexican shark research at Isla Guadalupe, Mexico with U.C Davis and CICIMAR, one of Mexico’s leading marine institutions.

As for the exact location of the new great white shark aggregation site, Douglas remains tight-lipped, fearing other operators would quickly overwhelm the site. The only clue offered as of yet: it's a very remote island in the Southern Ocean.

For now, here's a preview: