Lebanese Diver 'Threatened with Death' for Calling Out Dynamite Fishermen; 'The Situation is Worsening'

For Deep-Sea Cephalopods, 'Switchable' Camouflage Saves The Day; 'Seeing Others Without Being Seen Yourself' 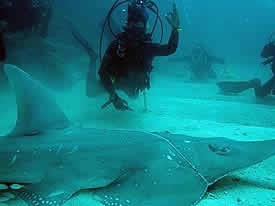 BEIRUT, Lebanon -- The Sport Diver magazine - a National Geographic affiliate - featured, in its December issue, the story of a Lebanese diver who saved an endangered shark in Mauritius. Naji Cherabieh, a scuba diver with over 12 years of experience in deep sea diving and underwater photography, was on a diving trip in Mauritius, when he spotted a guitar shark, which is an endangered member of the shark family, "frantically thrashing about in the sand."

"As I got really close, I saw that the shark was entangled in an anchor rope and was completely stuck and helpless," Cherabieh said.

"I also realized that this was a guitar shark, an endangered species and one of the world's rarest sharks. It was a magnificent and beautiful creature," he said.

While approaching the trapped shark, Cherabieh began to run out of oxygen and was being circled by grey and bull sharks.

"The large number of sharks circling was because they saw the distress of the Guitar shark and they were simply waiting to attack it," he said.

"I had to help it, regardless" Cherabieh said.

Cherabieh was then joined by fellow divers and he recalled how the thrashing of the entangled shark made the task of saving it twice as difficult.

"We finally managed to cut it free and it seemed fairly tired by most importantly unhurt," Cherabieh said.

"The personal satisfaction after such an extraordinary event is amazing, because not only did we help a magnificent and endangered creature, but it was pure luck that I happened to be there, at that exact time and place, on my last dive ... a memory I will cherish forever!"