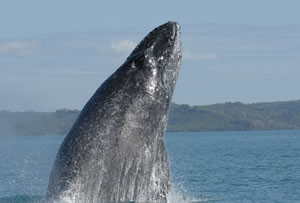 A recent study has found humpback whales on both sides of the southern Indian Ocean are singing different tunes. credit S. Cerchio/WCS

A recently published study by the Wildlife Conservation Society and others reveals that humpback whales on both sides of the southern Indian Ocean are singing different tunes, unusual since humpbacks in the same ocean basin usually all sing very similar songs.

The results of the study—conducted by researchers from WCS, Columbia University, and Australia —contradict previous humpback whale song comparisons. Generally, when song from populations in the same ocean basins are compared, researchers find that the songs contain similar parts or "themes." The differences in song between the Indian Ocean humpback populations most likely indicate a limited exchange between the two regions and may shed new light on how whale culture spreads.

The paper appears in the January edition of Marine Mammal Science and is available on the journal's website. The authors of the study include: Anita Murray, formerly of the Wildlife Conservation Society and Columbia University ; Salvatore Cerchio, Yvette Razafindrakoto, and Howard Rosenbaum of the Wildlife Conservation Society; Robert McCauley of Curtin University, Perth, Australia; Curt S. Jenner of the Centre for Whale Research, Fremantle, Australia; Douglas Coughran of the Department of Environment and Conservation, Perth, Australia; and Shannon McKay of the School of Life and Environmental Science, Warrnambool, Australia.

"In the Northern Hemisphere, within an ocean basin whales sing songs that are composed of the same themes. However, whales in the southern Indian Ocean are singing almost completely different songs. Songs from Madagascar and Western Australia only shared one similar theme, the rest of the themes were completely different," said lead author Anita Murray, who conducted the research while a graduate student at Columbia University and the Wildlife Conservation Society and is currently pursuing her doctorate at the University of Queensland in Australia. "The reason for this anomaly remains a mystery. It could be the influence of singing whales from other ocean basins, such as the South Pacific or Atlantic, indicating an exchange of individuals between oceans which is unique to the Southern Hemisphere."

The songs of humpback whales are generally sung by male individuals on a population's winter breeding grounds, migratory routes, and summer feeding grounds. The songs themselves are complex arrangements of parts or "themes," consisting of ascending and descending wails, moans, and shrieks that are repeated in cycles lasting up to 30 minutes. The transmission of songs between individuals from different populations is likely to occur on feeding grounds or during migration when whales from different populations mix. Or, transmission of song may occur when individual male "troubadours" travel to different breeding grounds between breeding seasons or possibly during the same breeding season.

The research team made recordings of humpback whale songs in two locations in coastal Madagascar and three locations along Western Australia during the 2006 breeding season. Research teams in both regions used hydrophones to record the songs of 19 individual whales. Overall, the authors captured more than 20 hours of whole and partial songs for visual and audio analysis. The comparison revealed few similarities between songs; of the eleven themes recorded in both regions, only one theme was shared by both populations.

Due to the limited duration of the study (only one breeding season), researchers point out that continued analysis of songs in Madagascar and Australia are needed to examine the reasons for the limited similarity in repertoire.

Dr. Howard Rosenbaum, Director of WCS's Ocean Giants Program said: "These song comparisons complement our findings based on other methods, such as those from genetic analysis, to understand how whale populations interact with one another." WCS conservationist Salvatore Cerchio added: "We have glimpsed here a snapshot of differences in repertoire between humpback whale populations of the Indian Ocean during a single season. Continued monitoring of these songs can provide us with valuable information on how whale songs are exchanged and how those channels of cultural transmission can be protected in the future."

WCS has been involved in research on humpback whales since the 1960s, when researchers from the New York Zoological Society (now the Wildlife Conservation Society) discovered that the vocalizations of humpback whales are, in fact, songs, defined as a series of themes that are repeated in cycles. For the past decade, WCS's Ocean Giants Program has conducted an extensive molecular analysis of humpback whale populations in the southern Atlantic and Indian oceans in an attempt to better define discrete populations.

The humpback whale is a baleen whale that grows up to approximately 50 feet in length. The species has distinctively long pectoral fins and a head with knobs on the top and lower jaw. The slow-swimming species was hunted commercially until the International Whaling Commission protected the species globally in 1966. Current estimates for humpback whale numbers are widely debated. While they are recovering, total population sizes may represent only a small percentage of the original global population.