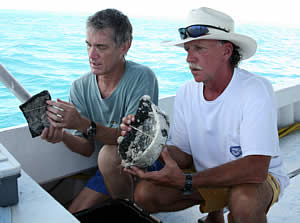 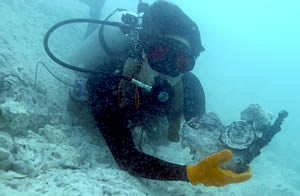 KEY WEST, Florida -- For the past four years, Keith Webb’s Blue Water Ventures Key West, a joint venture partner of Mel Fisher’s Treasures, has been searching for – and discovering – sunken treasures of silver, gold, and pearls in the waters near the Marquesas Keys in the Florida Straits. This is where the rich 600-ton Spanish galleon Santa Margarita was destroyed in the hurricane of 1622.

The BWVKW team concluded the 2008 season with almost back-to-back discoveries—a solid gold chalice and solid gold toothpick/earwax-spoon, both of which made worldwide news. With the interim months spent in methodical review and planning, they returned to sea in 2009 and encountered almost instant gratification: more discoveries of gold jewelry and gold flakes, followed by silver coins, an intact sword, and now—in an area where the sea bottom rises sharply, a broken anchor and a rock—two seemingly unglamorous artifacts that have caused as much excitement among the team as their discoveries of gold.

Why the excitement over a broken anchor and a rock? BWVKW archaeologist James Sinclair explained that the anchor ring and shank discovered by crew diver Mike Perna matches a partial anchor found more than 10 years ago, and these two anchor pieces fall in line with a developing “ghost trail” of artifacts that the team has identified and followed into a previously unexplored area. The rock is special because it is a ballast stone, once used to fill the hulls and counter-balance top-heavy Spanish galleons. Other objects used for ballast were treasure chests full of silver coins and bars of silver weighing up to 90 pounds each. When ballast is found, divers hearts pound.

While the first major find of Santa Margarita shipwreck cargo occurred nearly 30 years ago, in April of 1980, it is known from archival records that over 800 ounces of registered gold, 145 silver bars, more than 80,000 silver coins, as well as multi-millions in contraband still await discovery.

Three miles from the deeper waters where her sister-ship, the famed Nuestra Senora de Atocha crashed upon a reef and began to break apart, the terrain where the Margarita wrecked has presented a different set of challenges for searchers. The sea here is shallower, with ripping currents that sculpt the area’s deep sands into dunes of startling height—dunes that can rise and vanish in a matter of moments. These deep and rapidly shifting sands defeated Spanish salvage attempts in the 17th century, and undermined a series of searchers in the 20th century. Entrepreneur Keith Webb, a financial specialist fascinated with sunken shipwrecks, recognized that technology had progressed to a point to meet the Margarita’s unique challenges and contacted Kim Fisher, whose company holds the federal permit to search the area, and proposed a joint-venture partnership. The agreement between the two CEO’s has resulted in BWVKW recovering more millions in treasures from the Santa Margarita than have been found in decades.

The Santa Margarita grounded into a sand bar and was ripped to pieces, creating a debris field much like that of a piÃ±ata beaten by sugar-crazed children. “The area discovered almost 30 years ago was not the point of impact for the ship,” said BWVKW Chief of Operations Dan Porter.

“What we are looking for now is the impact zone, and as we explore the area where Mike Perna found the anchor shank and ballast stone, we are confident that we will find the place where the trail of Santa Margarita treasures originated.”