'Red Devil' Squid, Jellyfish Point to Ocean Disruptions; 'Good for Some People and Bad for Others'

Report: Marine and Freshwater Organisms Could be Sustaining Damage from UV Rays 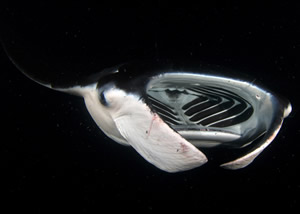 Water flows through the 40-inch (1 meter) wide mouth of a giant manta and over the rayâs gill arches. credit S Kajiura/Florida Atlantic U

SEATTLE, Washington -- Since dried filters from the mouths of filter-feeding rays hit apothecary shop menus in Asia â the thought being that eating ground-up filters will cleanse one's liver â there's been no way to know which of these gentle-natured rays was being slaughtered.

Unlike predatory rays that attack and crush prey with their mouths, the filter-feeder rays eat plankton particles, larvae and fish eggs that they sieve from seawater. Most lack barbs other rays are notorious for, and the filter-feeders are generally considered harmless, although one group is provocatively named devil rays â they have horn like fins on their heads â and the other group includes the monstrous-sized manta, measuring up to 23 feet (7 meters) across and weighing 2Â½ tons.

Now, scientists with the University of Washington's Friday Harbor Laboratories have discovered enough differences in the filters to be able to identify the giant manta and eight of the devil rays using the part from inside their mouth that has been dried and is being sold.

"There is no historical or traditional medical use of these filters and there's no scientific evidence they will help your liver filter out toxins. Still there are thousands of these ray filters in the markets, especially in Indonesia," said Misty Paig-Tran, who studied the filters in detail while earning her doctorate in biology at the UW.

People have been looking at this group of animals for protection under the Convention on International Trade in Endangered Species, but there has been no way to know which of the groups need protection because the filters are cut out and the rest of the animal is discarded, she said.

Paig-Tran is lead author of the cover story in the September 2013 issue of the Journal of Morphology about the distinctive filters of these rays.

"You could take this paper to a market and tell which species the filters came from, and that would give you an idea of the number of each species being hunted," she said.

The basic ray filter consists of plates of tissue that share the gill arches with respiratory organs taking oxygen out of the water so the rays can "breathe." There are 10 gill arches, five on each side of the mouth. Paig-Tran estimates that the devil rays, for instance, might be handling a flow of 4 gallons a second or 240 gallons a minute for breathing and feeding, based on their mouth size.

Paig-Tran determined that the shapes of gill arches distinguishes them as filter-feeding rays and the filter tissue with its rows of what look like fern leaflets makes it possible to tell one ray from the other. Three of the ray species have filters with layers of hair like cilia to capture food, the rest do not. At the microscopic level many of the filters have denticles, which are tooth-like points that can deflect hard particles.

Paig-Tran relied on specimens borrowed from museums to describe these and other differences. She had also traveled to the Yucatan Peninsula, Mexico, to swim with rays and filter-feeding whale sharks to try to film their mouths as they feed.

"Whale sharks are incredibly docile and don't mind you in front of them, filming into their mouths. So long as you're a fast swimmer, you're OK," she said, describing swimming on her back, camera in hand, in front of the school-bus-sized creatures.

"Mantas are more difficult. Mantas have one of the largest brain to body ratio of any of the fishes. They are highly intelligent, they don't like to be disturbed and they're highly maneuverable."

And the devil rays?

These kinds of rays typically live in tropical and subtropical ocean waters. They are spotted where plankton-rich water upwells and they can feed, but not much is known about what they're eating. This new research describing the filters in detail could provide more clues. And Paig-Tran put satellite tags on a few of the rays to track their movements.

"Knowing their specific prey and if they are following blooms of particular plankton would be a way for us to remotely detect places where we might find these rays. Then we could learn more about their basic biology, where they are going, where they mate, where are they producing their young," Paig-Tran said.

So apart from conservation implications, the new findings might be one step toward developing better industrial filters, said Adam Summers, a UW professor of biology, co-author on the paper and leader of a lab that looks for opportunities to copy or imitate nature, a field called biomimicry. The other co-author is Thomas Kleinteich, a postdoctoral researcher with the lab.

While human-made cross-flow filters eventually clog, the filters of rays don't. They'd have been extinct long ago if they did.

"There is no filter in the manufacturing realm like the ones these rays use," Summers said. His lab is now building models to better show how it's happening.

The work was funded by the National Science Foundation and National Geographic.