The Secret Life of the Not So Sluggish Sea Slug; 'Nature's Gift to Neurobiologists' 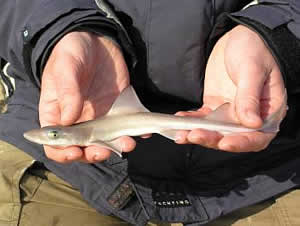 This is a starry smooth-hound pup in Wexford. Credit: Edward Farrel

DUBLIN, Ireland -- They grow to over a meter in length, can weigh up to twelve kilos and each summer they swarm into the shallow waters of the Irish east coast. Despite this, the starry smooth-hound has remained Ireland's least well known shark species. However, thanks to researchers at University College Dublin, whose work is now published in the Journal of Fish Biology, this may be about to change.

Dr. Edward Farrell, who recently graduated from UCD School of Biology & Environmental Science, spent the last four years studying these unusual sharks. Under the supervision of Dr. Stefano Mariani of the SBES and Dr. Maurice Clarke of the Marine Institute, the PhD project successfully investigated the age, growth, reproduction and identification of the species in the Northeast Atlantic.

"It's amazing how little was known about this species considering their size and abundance on the east coast," said Farrell. "Until recently we weren't even sure what species we were dealing with but we developed a genetic method which allowed us to confirm that it is the starry smooth-hound which occurs in Irish waters and not the related common smooth-hound. Once this was established we were able to investigate their life-history."

Starry smooth-hounds were previously considered to be a fast growing and early maturing species, meaning they were not a conservation concern. However the results of the four year project have revealed that starry smooth-hounds in Irish waters actually grow twice as slowly as previously estimated and only reproduce every two years rather than annually as is the case in the Mediterranean.

"Some of the findings are quite worrying for the species as males don't mature until they are 4-5 years old and females until they are 6 years old, said Farrell. "Females also appear to take two years to complete the reproductive cycle. The pups develop inside the female for approximately 12 months before being born after which the female has a resting period of about another year before she is capable of becoming pregnant again."

With such a slow reproductive rate, unregulated commercial fishing could have a serious impact on the species in a short time, as was seen with the spurdog fisheries in the 1980s. Spurdogs were once the most abundant shark species in the Northeast Atlantic however they have been all but wiped out by commercial fisheries and are now listed as critically endangered on the IUCN Redlist.

Starry smooth-hounds are not a valuable commercial species in Ireland but on the continent they are highly sought after and the landings from French boats, currently about 2640 tonnes annually, are increasing. The previous lack of knowledge of their basic life history in the Northeast Atlantic has prevented the development of management and conservation strategies.

Once abundant in the Mediterranean Sea and Southern European waters, years of over fishing have caused their disappearance from much of their former range. In Irish waters though, starry smooth-hounds seem to be increasing in abundance. The reasons for this are unclear but it does offer the unique opportunity to help conserve this enigmatic species.

These findings of the project indicate that starry smooth-hounds are more susceptible to exploitation than previously thought and management measures are needed now to ensure their conservation.

"There are currently no management measures for this species in European waters mainly due to the lack of biological information," says Farrell. "So our main aim was to gather the necessary data. Hopefully this can be used now to ensure their sustainability and prevent a repeat of the overexploitation seen in Mediterranean waters."

Stefano Mariani believes that it is paramount to protect these sharks in Irish waters. "Smooth-hounds have a very specialized diet: they don't eat fish, they feed on bottom-dwelling shellfish, crunching crabs with their very peculiar molariform teeth. These animals are likely to have a very important role in the trophic web".

Starry smooth-hound sharks are also highly sought-after and respected by anglers, and they certainly provide an additional excitement to our coasts.

"Dublin Bay offers tourists the opportunity to easily observe two species of seals," concluded Mariani. "We should be proud that our coasts also provide beach-goers with a chance of swimming alongside beautiful and harmless sharks. There are not many other places like this in Europe."