20 New Shark Species Discovered in Indonesia; 'The Largest Shark Fishery in the World' 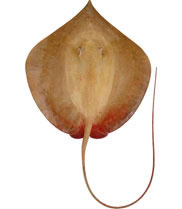 Hortle’s Whipray, a species found only in West Papua, off the coast of New Guinea. Image courtesy of CSIRO.

At least 20 new species have been discovered in the first comprehensive survey of Indonesia's sharks and rays since the 1850s.

The five-year survey of catches at local fish markets provided the first detailed description of Indonesia's shark and ray fauna - information which is critical to their management in Indonesia and Australia.

Based on the survey's findings, the Australian Centre for International Agricultural Research has published a 330-page, full-colour, bilingual 'field guide' entitled: Economically Important Sharks and Rays of Indonesia.

"Indonesia has the most diverse shark and ray fauna and the largest shark and ray fishery in the world, with reported landings of more than 100,000 tonnes a year," says one of the guide's co-authors, Dr William White of CSIRO Marine and Atmospheric Research. "Before this survey, however, there were vast gaps in our knowledge of sharks and rays in this region.

"Good taxonomic information is critical to managing shark and ray species, which reproduce relatively slowly and are extremely vulnerable to over-fishing. It provides the foundation for estimating population sizes, assessing the effects of fishing and developing plans for fisheries management and conservation."

The survey represents the first in-depth look at Indonesia's sharks and rays since Dutch scientist Pieter Bleeker described more than 1100 fish species in 1842-1860. Many of Bleeker's proposed new shark and ray species were rejected by his peers who were skeptical of such high levels of diversity.

After more than 250 days 'in the field', Dr White and his colleagues agreed with Bleeker's findings and uncovered further taxonomic riches.

From 2001-2006, they photographed and sampled more than 130 species on 22 survey trips to 11 ports across Indonesia. More than 800 specimens were lodged in reference collections at the Museum Zoologicum Bogoriense at Cibinong, Java, and the Australian National Fish Collection at Hobart.

Six of their discoveries have now been formally described. These include two species found only in Bali: the Bali Catshark and Jimbaran Shovelnose Ray, and one found only in West Papua: the Hortle's Whipray.

The survey was part of a broader project working towards improved management of sharks and rays in Indonesia and Australia. The project documented the value of sharks and rays to the small-scale fishing sector, helped to develop a National Plan of Action for sharks and rays and enhanced Indonesian capacity in fisheries research. Participants were: CSIRO, Murdoch University, Queensland Department of Primary Industries and Fisheries and Indonesia's Research Centre for Capture Fisheries and the Indonesian Institute of Sciences.