Lions And Tigers: Too Much For The Gulf Of Mexico To Bear? Like 'Europeans Bringing Smallpox To The New World' 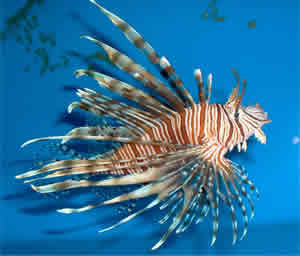 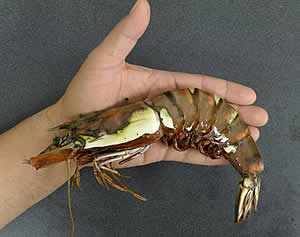 COLLEGE STATION, Texas -- There's an unseen foreign invasion going on in the Gulf of Mexico. Its stealth and speed is matched only in the uncertainty it has created among scientists and the people who make their livings from the Gulf's waters.

Lionfish and black tiger shrimp are only two of more than 40 species of non-indigenous sea life known to be spreading through the Gulf of Mexico from their native waters, but they are seen by many resource experts as the most threatening. Lionfish have been a growing problem in the South Atlantic Ocean and Caribbean Oceans Sea for most of a decade, but black tiger shrimp are a relatively new phenomenon. A few were captured in the Gulf of Mexico each year beginning in 2006, but the numbers rose significantly in 2011. During this year, more than 60 of the shrimp were brought by shrimp boats to one dock alone in Louisiana and the first captures off Texas' coast were reported to the federal government. Three black tiger shrimp were caught in Aransas Bay, one was caught in Sabine Lake and one was caught in federal waters about 70 miles offshore from Freeport.

Lionfish are strikingly colored, brightly striped and venomous fish that can quickly populate an area and decrease native populations through either eating them or chasing them away. Black tigers are the largest species of shrimp in the world. Females are slightly larger than males and can grow to an average of about a foot in length and weigh close to three-fourths of a pound. Black tiger shrimp eat the same types of food as native shrimp species, but as they grow they also eat their smaller cousins.

"The biggest concern we have is what are the ecological impacts of these invasive species?" says Dr. James Morris, an ecologist with the National Oceanic and Atmospheric Administration (NOAA) who has been working with lionfish for about 10 years and is now taking the lead in NOAA's efforts to study black tiger shrimp. "When you look across the history of invasive species, there have been some very extreme impacts that have resulted from invasions."

Invasive species often find themselves in foreign ecosystems devoid of the natural predators and diseases that kept their populations under control in their native ranges. Free of these challenges that plague native wildlife, invasive species can turn all of their energy toward feeding and reproducing. In some cases, the manner in which invasive species live can physically damage their adopted ecosystems to the point where it becomes poor habitat for native species.

Lionfish and black tiger shrimp, both native to the Indian and western Pacific Oceans, are noted for their aggressive feeding behaviors and hardiness â they can live in a wide range of water temperatures and salinities. These traits make them perfect, and dangerous, invaders.

The Texas Sea Grant College Program's Tony Reisinger spoke to the Brownsville-Port Isabel Shrimp Producers Association in early December about the growing number of black tiger captures in the Gulf of Mexico â perhaps as many as 1,000 this year including five that represent the first ever caught off the Texas coast.

Association members, who represent a fleet of 135 vessels that fish off Louisiana, Florida and Texas, were "extremely concerned to the point where they want to find out what the federal government will do about the black tiger shrimp," says Reisinger, Cameron County Coastal and Marine Resources Agent. "They are concerned about whether it will affect their livelihood."

Thus far, black tiger shrimp have left experts scratching their heads. No one seems to know where the shrimp came from, or what affect they will have on the three species of shrimp native to the Gulf of Mexico and, by extension, the $700 million shrimp fishing industry.

"We just don't know what the long term impacts are going to be," says Gary Graham, Texas Sea Grant's Fisheries Specialist. "I don't know whether these shrimp will establish themselves in the Gulf of Mexico or play themselves out, but I think they could become a more serious problem than anyone originally thought."

Black tiger shrimp are an aquacultured species in various places around the world, but their route to the Gulf remains uncertain pending genetic testing. There was an accidental release of black tigers from a research facility in South Carolina in 1988, but most of those animals were thought to have been caught by local fisherman by the early 1990s. No more tiger shrimp were reported caught until 2006. No aquaculture operation in the U.S. grows black tiger shrimp, but there have been reports of them being raised at sites in the Caribbean Sea. One popular theory holds that black tiger shrimp escaped into the sea from an aquaculture pond in the Caribbean that was breached by a hurricane in 2005. Others speculate that the shrimp hitched a ride from Asian to U.S. waters in the ballast tanks of ships.

Leslie Hartman, Matagorda Bay Ecosystem Leader with the Texas Parks and Wildlife Department, is part of a casually organized group of people from various resource management agencies around the Gulf and South Atlantic who have banded together to perform genetic testing on the black tiger shrimp being caught around the nation's coastline. She says the group has genetic material from the population of animals that escaped from the South Carolina facility in 1988 and will use it to determine if the growing U.S. population owes its lineage to the South Carolina escapees.

"We're trying to figure out where these animals came from," says Hartman. "If these are all genetically related back to the South Carolina shrimp, that tells us something about invasive species â that they will go into sort of a hiatus and then can re-surge. If the genetics show they are from different and unrelated populations, that tells us something else, like there was a second or third or fourth introduction. The more we understand about how invasive species spread, the more likely we are to intervene appropriately the next time."

Black tiger shrimp are a paradox among invasive species. On one hand they present the same problems as any other non-indigenous species. One of the biggest problems they pose is that they are susceptible to about 16 diseases â not all of them fatal â that can be transmitted to native shrimp and crabs, says Hartman.

"The potential impact is roughly similar to We just don't know what the long term impacts," she says. "They can put a hurt on the domestic shrimping and crabbing industries."

On the other hand, black tiger shrimp are a highly valuable commodity, although Reisinger said he has heard anecdotal reports that some shrimpers have thrown captured black tiger shrimp back into the Gulf of Mexico because they did not think they were a marketable species. The shrimp fetch a market price similar to native white shrimp and slightly more than native brown shrimp. As of early December, the largest black tiger shrimp were going for about $8.35 per pound on the New York Market.

One of the five black tiger shrimp caught in Texas waters was found in the net of a boat operated by Western Seafood fishing near the Clay Pile Bank, about 70 miles east southeast of Freeport, in about 180 feet of water in mid-November.

Western Seafood's general manager, Patrick Riley, says it appears black tiger shrimp are poised to become a fourth harvestable species in the Gulf, but he is not counting on them becoming a cash crop any time soon.

"I don't know how long it will take before the population grows enough to be economically viable," Riley says. "Picking up one to two shrimp a year on a couple of boats will not help."

Lionfish, too, are a marketable fish, but on a much smaller scale. They are best caught using traps or by spear gun and are considered a delicacy in Asia, but they have yet to gain popularity in the U.S.

Harvesting lionfish for the restaurant trade appears to be to be an effective method for controlling local population densities in the South Atlantic and Mexico, says Morris.

Lionfish were most likely introduced to the Gulf through the aquarium trade â either as an accidental or intentional release from an aquarium. They have established themselves in the south Atlantic and Caribbean, and they were reported for the first time near Texas in mid-2011 at the Flower Garden Banks National Marine Sanctuary, located about 100 miles off the Texas-Louisiana border. Another was reported about 19 miles off South Padre Island in September 2011.

Although they are known for pillaging coral reefs, lionfish can live just about anywhere except where there is barren sand beneath them.

"The Gulf of Mexico comprises a wide array of habitats and anywhere you find structure you will find lionfish," says Morris. "Oil rigs provide high relief piling structures and I believe lionfish will recruit to these habitats in high densities. We have already seen high densities of lionfish around bridge pilings along the East Coast."

People visiting the coast generally play in the surf zones, which usually have barren sandy bottom, so lionfish-human interactions are not likely. Most interaction happen when people snorkel or dive around reefs or other structures. There are some reports that lionfish have acted aggressively toward humans, but Morris downplays these stories saying they are isolated. Lionfish are "curious animals," he says. The lionfish carries an impressive arsenal of venomous spines but uses them almost exclusively as defensive weapons. In humans, a lionfish sting can cause vomiting, fever, sweating and, in a few cases, even death.

Lionfish, which can grow to the size of a small football, are relentless predators that feed on recreationally and economically important reef fish like juvenile red snapper and grouper, and algae-eating species like parrotfish that keep reefs clean and healthy.

"This is an example of a cascading impact," explains Morris. "Some people think this is happening in the Bahamas. An increase in algae leads to a decrease in coral biomass."

Lionfish are not the sole reason coral reefs are declining, adds Morris. The lionfish invasion comes on the heels of coral bleaching, increased pollution, overfishing and climate change, he says.

"The difference is the lionfish invasion is happening much more quickly than the other stressors," says Morris. " In less than a decade, we've had a fish that has colonized basically the entire temperate and tropical Atlantic."

Once invasive species establish themselves, they are very difficult if not impossible to eradicate. As Hartman notes, "Prevention is the first defense to invasive species. Early detection is the second defense, and then you have to go into control and maintenance mode."

Anyone who encounters a black tiger prawn or lionfish can report it to a Texas Sea Grant Extension Program (TXSGE) agent or specialist. A list of TXSGE agents and specialists is available online at http://texas-sea-grant.tamu.edu/Outreach/extension.html, or by calling Texas Sea Grant at (979) 862-3773.

The Texas Sea Grant College Program is a partnership of university, government and industry focusing on marine research, education and outreach. It is administered through the National Oceanic and Atmospheric Administration and is one of 32 university-based Sea Grant Programs around the country. Texas Sea Grant is based at Texas A&M University.

TXSGE is a joint outreach program of Texas Sea Grant, Texas AgriLife Extension and the Commissioners Courts in participating counties.