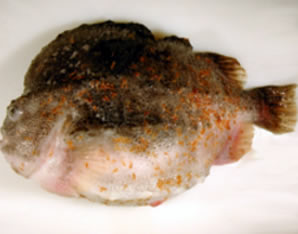 Øivind Øines has shown in his Ph. D. thesis that the sea louse, a parasitic copepod, is widely distributed among wild fish species along the Norwegian coast. The parasite is found in large numbers in the lumpfish, which is now considered to be one of the primary hosts of the parasite. The lumpfish in turn infects several types of farmed fish when it comes into the coast during the spring months.

Øivind Øines studied sea lice infestations in wild fish for his Ph. D. degree. Using genetic tools, he discovered more information about the pathways of infection and sources of infestation of this important fish parasite. By increasing our understanding of the patterns of infection of sea lice, Øines' work may prove significant both for the fish farming industry along the coast and for combating the parasite.

The sea louse Caligus elongatus is a parasite that attaches to the skin of fish. It can cause sores on its host, which at worst may prove fatal to the fish. It has been found on more than eighty different fish species in most or the world's oceans. Sea lice also infect farmed fish and have been reported in large numbers on farmed salmonids at sea, but also on other farmed species such as cod and halibut.

During his doctoral work, Øines developed genetic tools for the identification of these parasites and other related parasitic copepods, which may be nearly identical in appearance during several stages of their life cycles. Øines found two different genetic variants of the sea louse on wild fish, each of which appears to have different patterns of infestation.

Øines shows in his thesis that the sea louse is relatively common among wild fish. Fifteen per cent of wild fish were infected with this parasite outside Arendal during the period 2002 – 2004, which was the area for the field studies. Øines' studies have revealed in all likelihood how both wild fish and farmed fish become infected, and identified some of the most important probable sources of infection in the ocean. Dr. Scent. Øivind Øines defended his thesis on December 4, 2007, for the degree of Doctor Scientiarum at the Norwegian School of Veterinary Science with the title: Host selection and infection strategies in Caligus elongatus.

The work was carried out in regii of the Norwegian Veterinary Institute in close collaboration with other researchers at the Institute of Marine Research at Flødevigen, and at the University of Oslo.