Why Do Oysters Choose To Live Where They Could Be Eaten?

90% Lost: New Survey Reveals Oysters At Risk Around The World

Listen Up: Oysters May Use Sound To Select A Home; 'Like Living In A Busy Urban Area' 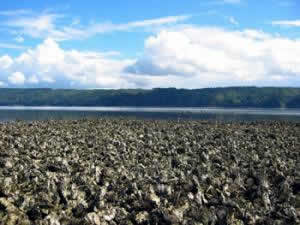 -- There are many reasons why living in dense groups with others of your own kind is a good idea. Oftentimes, aggregations of a species serve as protection from predators and harsh environments or may be beneficial to future reproductive success. However, in the case of oyster larvae, the selection of a place to call home can be a life or death decision.

According to an article in the May edition of Ecological Monographs, a team of scientists has found that despite the risk of being eaten by cannibalistic adults, oyster larvae choose to settle in areas of high oyster concentrations to take advantage of future benefits of increased reproductive capacity when they mature.“Oyster larvae make a life or death decision when they get their one chance to select where to attach themselves to the bottom,” said University of Maryland Center for Environmental Science Chesapeake Biological Laboratory researcher Dr. Mario Tamburri. “Our research shows that oyster larvae are willing to risk predation by adult oysters to cash in on the benefits accrued by spending the remainder of their lives among a large number of their species.”

The group set out to find:

Using a series of laboratory experiments and field surveys, Tamburri has demonstrated that oyster larvae are attracted from a distance by the scent of adults from the same species. Yet, death for a larvae captured by a feeding adult is nearly certain at greater than 90 percent.

A series of experiments examining the feeding currents produced by adult oysters and how larvae actively settle on reefs helped solved the puzzle. Oyster feeding currents are actually very weak, so while they will readily eat larvae if captured, settling larvae are just not captured very often. In fact, when a comparison of being captured versus landing on a suitable location to grow was conducted, it was found that more than 95 percent of an oyster reef is a safe zone for larvae. Given this low cannibalism risk at settlement, future payoffs appear to have driven the evolution of a gregarious settlement cue that promotes group living in oysters.

The article, “Mechanisms reconciling gregarious larval settlement with adult cannibalism,” is in the May edition of the Ecological Society of America’s journal Ecological Monographs.