Plastic For Dinner: A Quarter Of Fish Sold At Markets Contain Man-Made Debris 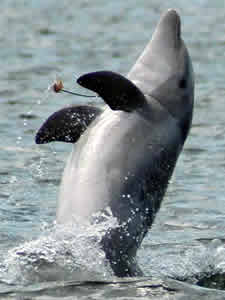 The image above right shows "Nelly" in the water before the plastic is removed. Photo Sarasota Dolphin Research Program 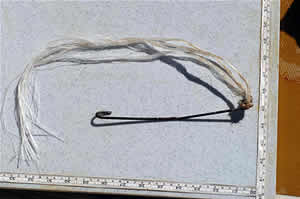 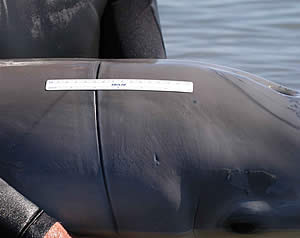 Close-up of the scar caused by the plastic band of the dolphin. Photo Sarasota Dolphin Research Program

SARASOTA, Florida -- On Monday (3-1-10), a team of researchers and veterinarians successfully freed a 9-month-old Sarasota Bay dolphin calf from plastic that was wound tightly around her body and beginning to cause deep abrasions to her skin.

Led by the Sarasota Dolphin Research Program — a partnership between the Chicago Zoological Society and Mote Marine Laboratory — the team of about 30 people briefly captured the calf and her mother and was able to free the animal from the plastic. The plastic was wound around her body between her blowhole and her pectoral fins.

The calf was first spotted "wearing" the plastic on Friday, Feb. 19, by Sarasota Dolphin Research Program staff during a regular survey of the Bay's dolphin population. After receiving permission from the National Marine Fisheries Service, which oversees the protection of wild marine mammals, a team attempted to capture the animal to remove the plastic on Friday, Feb. 26.

While the team was able to locate the animal, the calf and her mother remained in deep, rough waters that made a rescue attempt impossible.

On Monday, the team tried again and was able to capture the calf in Little Sarasota Bay and remove the plastic, which also had a rusting piece of metal attached to it. The material was sent to the National Marine Fisheries Service for identification.

"It was clear once we had the animal that the plastic was not going to come off on its own," said Dr. Randall Wells, who led the team. "The plastic was beginning to cause deep abrasions, which would likely have become deep lacerations over time. Fortunately, we were able to prevent that from happening. This is just another sad reminder that we need to be diligent about keeping trash from entering our waterways."

The Sarasota Dolphin Research Program is the world's longest-running study of a wild dolphin population and has been studying a span of five generations of the Bay's dolphins since 1970.

This calf is the seventh born to a Sarasota Bay dolphin known as FB25, a 32-year-old dolphin seen regularly in the area. The calf was nicknamed "Nelly" in honor of Dr. NÃ©lio Barros, former manager of Mote's Stranding Investigations Program between 2000-2006, who recently passed away.

In addition to staff from Mote and the Chicago Zoological Society, other rescue team members included staff from the National Marine Fisheries Service and Disney's Animal Programs.