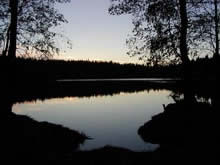 SIBERIA, Russia -- There probably is no one in Buryatia, Siberia, who hasn’t heard about the mysterious lake Sobolkho, which has a reputation of “fear’s residence”. This may seem unbelievable but the precise depth of the lake is still unknown, besides, the area surrounding the lake is infamous for the disappearance of people and domestic animals. They all are considered drowned although no body has ever been pulled from the bottom of the lake; moreover, animals drowned there were sometimes found in other waters and ponds. Local witnesses claim that there is also bright pink light which appears over the lake every night and is thought of as souls of the drowned people and animals asking for help to find peace in sepulchral life.

The natives have deemed the lake as bewitched for a long time and tried to conciliate the locals, but scientists from the Russian Academy of Sciences (RAS) stick to the opinion that Sobolkho is a classic example of natural geopathogenic zone, linked with peculiar structure of Earth crust on this territory.

The aura of death has surrounded the lake since mid centuries, but only in recent years the number of victims has been decreasing, mostly because more and more people are trying to avoid Sobolkho like a plague, and local children are forbidden to approach the lake.

Suspicious stories attracted attention of scientists of the RAS, and they organized research expeditions to Sobolkho to find out its depth. The lake was about 30 metres in diameter, with almost no plants around and ice-cold dark water. The scientists managed to measure depth in several spots of Sobolkho, with the maximum result 13 metres, which was undoubtedly impressive for such small lake. However, the measuring device didn’t reach the bottom in some other places which puzzled the scientists.

Nevertheless, the lake had witnessed a experimental research project prior to the expedition held by the RAS scientists. In 1995, a group of amateur divers arrived to Sobolkho in hope to find the key to the conundrum. They endlessly explored into lake, but the efforts were in vain. Many of the divers faced death. For instance, one of the brave expedition members dived down so deeply that he was sucked in by an underwater swirl. Later he found himself on the river-bank of Vitim, located several hundred meters from the lake. This shed some light on the mysterious nature of Sobolkho: the evidence of the underwater channel connecting the lake and the river Vitim could be considered proved.

300 horses and 500 cows have been lost in the lake within the past ten years. Human victims are not an exception too: 25 people died in Sobolkho`s waters during 1999-2000. The lake still leaves a lot of questions: how long will people and animals get lost in its waters and how incredible is the statement that the lake is bottomless? All people inhabiting the territories near Sobolkho simply believe that the lake has no bottom. The approximate suggested depth is 250 metres – deeper there is only uncertainty…