Research: Mesopelagic Fish Biomass In The Ocean Is 10 Times Higher Than Estimated 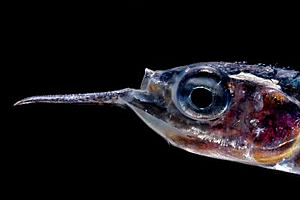 With a stock estimated at 1,000 million tons so far, mesopelagic fish dominate the total biomass of fish in the ocean. However, a team of researchers with the participation of the Spanish National Research Council (CSIC) has found that their abundance could be at least 10 times higher. The results, published in Nature Communications journal, are based on the acoustic observations conducted during the circumnavigation of the Malaspina Expedition.

Mesopelagic fishes, such as lantern fishes (Myctophidae) and cyclothonids (Gonostomatidae), live in the twilight zone of the ocean, between 200 and 1,000 meters deep. They are the most numerous vertebrates of the biosphere, but also the great unknowns of the open ocean, since there are gaps in the knowledge of their biology, ecology, adaptation and global biomass.

During the 32,000 nautical miles traveled during the circumnavigation, the researchers of the Malaspina Expedition (a project led by CSIC researcher Carlos Duarte) took measurements between 40°N and 40°S, from 200 to 1,000 meters deep, during the day.

Duarte states: "Malaspina has provided us the unique opportunity to assess the stock of mesopelagic fish in the ocean. Until now we only had the data provided by trawling. It has recently been discovered that these fishes are able to detect the nets and run, which turns trawling into a biased tool when it comes to count its biomass".

Xabier Irigoien, researcher from AZTI-Tecnalia and KAUST (Saudi Arabia) and head of this research, states: "The fact that the biomass of mesopelagic fish (and therefore also the total biomass of fishes) is at least 10 times higher than previously thought, has significant implications in the understanding of carbon fluxes in the ocean and the operation of which, so far, we considered ocean deserts".

Mesopelagic fish come up at night to the upper layers of the ocean to feed, whereas they go back down during the day in order to avoid being detected by their predators. This behaviour speeds up the transport of organic matter into the ocean, the engine of the biological pump that removes CO2 from the atmosphere, because instead of slowly sinking from the surface, it is rapidly transported to 500 and 700 meters deep and released in the form of feces.

Irigoien adds: "Mesopelagic fish accelerate the flux for actively transporting organic matter from the upper layers of the water column, where most of the organic carbon coming from the flow of sedimentary particles is lost. Their role in the biogeochemical cycles of ocean ecosystems and global ocean has to be reconsidered, as it is likely that they are breathing between 1% and 10% of the primary production in deep waters".

According to researchers, the excretion of material from the surface could partly explain the unexpected microbial respiration registered in these deep layers o