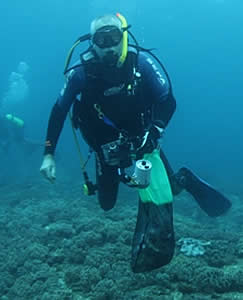 TEL AVIV, Israel -- Scientists have long believed soft corals, one of the many endangered elements of marine life, are only minor contributors to the structure of coral reefs. But that's not true, says new research from Tel Aviv University â and the preservation of soft corals is essential to the health of our seas.

Joint research by Tel Aviv University and the Academia Sinica, the National Museum of Natural Science of Taiwan, and National Taiwan University has revealed that soft corals, like stony corals, are one of the central building blocks of a reef, says Prof. Yehuda Benayahu of TAU's Department of Zoology at the George S. Wise Faculty of Life Sciences. A new in-depth analysis of reefs in the South China Sea has revealed that massive parts of the reefs are actually made from cemented microscopic skeletal elements of soft corals termed sclerites.

The finding, which recently appeared in the journal Coral Reefs, challenges conventional knowledge about soft corals and makes their conservation a priority. Like whales, dolphins, and stony corals, soft corals are a critically important component of the marine environment, Prof. Benayahu insists.

Building a home from flesh and bone

Reefs are ecosystems derived from biological organisms. They predominantly consist of cemented stony corals made of calcium carbonate. In contrast, the tissues of soft corals contain sclerites, which look like tiny pins or porcupine needles. In the reefs of Kenting National Park, located in South Taiwan, the researchers discovered that large structures originally believed to be comprised of stony corals were actually deposits of sclerites that been cemented to each other by calcium carbonate over time.

Soft corals were once considered a mere veneer of reefs, says Prof. Benayahu, not unlike a living ocean carpet. Once a soft coral colony disintegrates, the sclerites, each less than 1 millimeter in size, were thought to scatter and simply accumulate on the sea bed along with shells, sea urchin spines, and other smaller materials. But in fact, they are integral throughout the reef ecosystem and provide a home for creatures such as fish, snails, algae and many others.

Outside of the marine environment, soft corals also work to protect our human habitat. Boulders and reef structures made of cemented soft coral sclerites that form near shores act as natural wave breakers, Prof. Benayahu says, protecting land against erosion by the sea or ocean during typhoons or cyclones.

Carbon dioxide burning through our oceans

Not only is soft coral widespread, especially throughout the Indo-Pacific reefs, but it is also extremely rich in biodiversity. The genus Sinularia, the soft coral used in reef building, is composed of about 170 species worldwide. This is more than any stony coral genus, including 130 species of staghorn corals, the most populous. Given its spread and diversity, the group is certainly understudied, Prof. Benayahu says.

Soft coral is in danger of being wiped out of the marine environment. One major culprit is the rising acidity of our oceans, caused by heightened levels of carbon dioxide, says Prof. Benayahu. "As burning oil dissolves into the sea water, the water becomes more acidic, which then dissolves calcareous materials," he warns, including corals whose skeletons are made of calcite.

Soft corals need not only to be protected, but also further studied to understand their role in the entire ecosystem. Questions such as the rate at which soft corals can form reefs, especially as they face environmental challenges such as temperature changes, water acidity, and rising sea levels, still linger.

This investigation was led by Dr. Ming-Shiou Jeng of the Academia Sinica's Biodiversity Research Center, along with colleagues from the National Museum of Natural Science in Taichung and National Taiwan University, Taipei.