Underwater Sponges And Worms May Hold Key To Cure For Malaria; 'We Haven't Even Begun To Explore The Oceans' Depths' 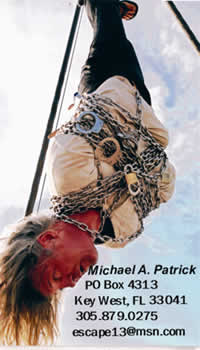 KEY WEST, Florida -- He escaped from a straitjacket, but not the long arm of the law.

Michael Anthony Patrick, a 55-year-old street performer, was charged with negligence Wednesday after his act prompted a massive harbor search.

Authorities said the longtime Key West performer regularly escapes from a straitjacket in his act at the nightly “Sunset Celebration” here.

Tuesday, though, he jumped into Key West Harbor and disappeared, police said.

The stunt prompted police and fire department dive teams to scour the bottom of the bay.

Patrick was in custody and could not be reached for comment. He was being held on $50,000 bail. It was not known whether he had an attorney.

Police estimated the search cost about $25,000.

Patrick said he would reveal the secret of his stunt to the public, but police said he refused to tell detectives how he managed to survive the jump.

Police Chief Bill Mauldin said he was recommending the performer be banned from future acts at the Key West pier.