US Mining Giant Confident on Indonesian Ocean Pollution Verdict; 'Their Testimony was Torn Apart by Our Lawyers' 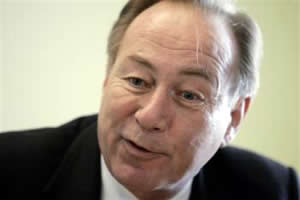 Newmont executive Richard Ness, is cleared of all charges. He faced a maximum 10 years in jail and a $60,000 fine.

MANADO, Indonesia -- A court in Indonesia on Tuesday cleared US mining giant Newmont of dumping tonnes of toxic waste, closing for now a case that risked the nation's efforts to increase foreign investment.

Both Ness and the local branch of Newmont, the world's largest gold miner, were acquitted, although prosecutors said they would appeal.

They had been charged with pumping tonnes of waste containing mercury and arsenic into Buyat Bay, which is some 2,300 kilometres (1,400 miles) northeast of Jakarta, from its now defunct mine on Sulawesi island.

Ness and PT Newmont Minahasa Raya were also accused of sickening villagers and poisoning marine life with the waste.

Ness, in court with his wife and son to hear the verdict, said that he was "delighted that justice and truth had prevailed."

"I am thrilled that after two and a half years of false allegations, my name and that of my fellow employees have been cleared and our reputation restored." But he called for organisations that pushed pollution claims against Newmont to be prosecuted. "I do feel that there was a crime committed and many people in the community suffered because of that crime," he told reporters.

Prosecutor Purwanta, who led the 20-month trial in the Manado provincial court on Sulawesi, said he would file an appeal within 14 days.

"They (the judges) only adopted the defence plea of the lawyer and dismissed what had been proven by the prosecutors," he said.

Around 100 environmentalists, who had gathered outside the court, chanted slogans against the decision while armed riot police stood guard. Some 100 villagers, both supporters and opponents of Newmont, were also on hand.

"This is unjust," said one, Janiah Ompi, who claims the pollution caused her tumour and eye problems.

"This is proof that justice is difficult to enforce for small people like us in our own country," said villager Anwar Stirman, weeping.

Environmentalists had hoped that a guilty verdict would send a signal to companies operating in Indonesia amid increasing environmental degradation in the resource-rich nation.

Complaints from villagers living around the bay included headaches, skin rashes and tumours, prompting a police inquiry and charges against Newmont in August 2005.

Studies of waters around the bay have shown conflicting results. A World Health Organisation-backed report and others found no evidence of pollution, but government tests showed high levels of toxins.

"We conclude that no pollution or environmental degradation took place in Buyat Bay and surrounding areas," he said on behalf of four other judges that heard the case.

"We declare that the defendants be freed from all charges levelled by the prosecutors."

Newmont had always denied the charges, saying it disposed of toxins safely and levels of mercury and arsenic were within acceptable levels.

It had warned a guilty verdict would prompt it to reconsider investing in Indonesia, which is trying to lure foreign firms and overcome an international reputation for corruption and bureaucratic red tape.

"This is positive. Investors will feel confident about the legal system in Indonesia and this is particularly important," said Priyo Pribadi, executive director of the Indonesian Mining Association.

The US embassy said the verdict "will undoubtedly have a beneficial effect on Indonesian and foreign investor confidence."

Denver-based Newmont agreed last year to pay 30 million dollars in an out-of-court settlement in a civil lawsuit with the government over the waste.

That deal, in which Newmont did not admit wrongdoing, funds environmental monitoring in the bay area as well as projects aimed at health, education and infrastructure.

The environment minister, backed by non-governmental organisations, had earlier launched a separate multi-million dollar law suit against Newmont, which a court in Jakarta rejected in November 2005.