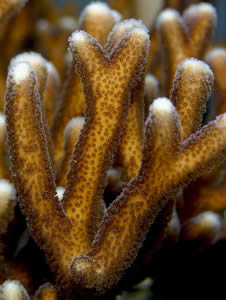 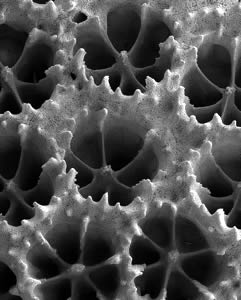 An explosion of knowledge has been made in the last few years about the basic biology of corals, researchers say in a new report, helping to explain why coral reefs around the world are collapsing and what it will take for them to survive a gauntlet of climate change and ocean acidification.

Corals, it appears, have a genetic complexity that rivals that of humans, have sophisticated systems of biological communication that are being stressed by global change, and are only able to survive based on proper function of an intricate symbiotic relationship with algae that live within their bodies.

After being a highly successful life form for 250 million years, disruptions in these biological and communication systems are the underlying cause of the coral bleaching and collapse of coral reef ecosystems around the world, scientists will report tomorrow in the journal Science.

The research was funded in part by the National Science Foundation.

"We've known for some time the general functioning of corals and the problems they are facing from climate change," said Virginia Weis, a professor of zoology at Oregon State University. "But until just recently, much less has been known about their fundamental biology, genome structure and internal communication. Only when we really understand how their physiology works will we know if they can adapt to climate changes, or ways that we might help."

Corals are tiny animals, polyps that exist as genetically identical individuals, and can eat, defend themselves and kill plankton for food. In the process they also secrete calcium carbonate that becomes the basis for an external skeleton on which they sit. These calcified deposits can grow to enormous sizes over long periods of time and form coral reefs – one of the world's most productive ecosystems, which can harbor more than 4,000 species of fish and many other marine life forms.

But corals are not really self sufficient. Within their bodies they harbor highly productive algae – a form of marine plant life – that can "fix" carbon, use the energy of the sun to conduct photosynthesis and produce sugars.

"Some of these algae that live within corals are amazingly productive, and in some cases give 95 percent of the sugars they produce to the coral to use for energy," Weis said. "In return the algae gain nitrogen, a limiting nutrient in the ocean, by feeding off the waste from the coral. It's a finely developed symbiotic relationship."

What scientists are learning, however, is that this relationship is also based on a delicate communication process from the algae to the coral, telling it that the algae belong there, and that everything is fine. Otherwise the corals would treat the algae as a parasite or invader and attempt to kill it.

"Even though the coral depends on the algae for much of its food, it may be largely unaware of its presence," Weis said. "We now believe that this is what's happening when the water warms or something else stresses the coral – the communication from the algae to the coral breaks down, the all-is-well message doesn't get through, the algae essentially comes out of hiding and faces an immune response from the coral."

This internal communication process, Weis said, is not unlike some of the biological processes found in humans and other animals. One of the revelations in recent research, she said, is the enormous complexity of coral biology, and even its similarity to other life forms. A gene that controls skeletal development in humans, for instance, is the identical gene in corals that helps it develop its external skeleton – conserved in the different species over hundreds of millions of years since they parted from a common ancestor on their separate evolutionary paths.

There's still much to learn about this process, researchers said, and tremendous variation in it. For one thing, there are 1,000 species of coral and perhaps thousands of species of algae all mixing and matching in this symbiotic dance. And that variation, experts say, provides at least some hope that combinations will be found which can better adapt to changing conditions of ocean temperature, acidity or other threats.

The problems facing coral reefs are still huge, and increasing. They are being pressured by changes in ocean temperature, pollution, overfishing, sedimentation, acidification, oxidative stress and disease, and the synergistic effect of some of these problems may destroy reefs even when one cause by itself would not. Some estimates have suggested 20 percent of the world's coral reefs are already dead and an additional 24 percent are gravely threatened.

The predicted acidification of the oceans in the next century is expected to decrease coral calcification rates by 50 percent and promote the dissolving of coral skeletons, the researchers noted in their report.

"With some of the new findings about coral symbiosis and calcification, and how it works, coral biologists are now starting to think more outside the box," Weis said. "Maybe there's something we could do to help identify and protect coral species that can survive in different conditions. Perhaps we won't have to just stand by as the coral reefs of the world die and disappear."