Rare Megamouth Shark Netted in the Philippines; Only 35th Recorded Specimen in the World 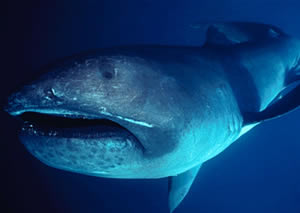 Hundreds of residents of Bayawan City in southern Oriental Negros woke up yesterday to the sight of the biggest fish they ever saw following the accidental capture by fishermen of a rare five-meter megamouth shark.

The shark, which was estimated to weigh one ton, was found by fishermen struggling to free itself from a net just off the Bayawan coast, some 100 kilometers south of Dumaguete City.

Dan Aurelia, reporter of Radyo Natin Bayawan, said that the shark was wounded, probably as a result of its struggling.

A passing pumpboat belonging to the Bayawan City government saw the megamouth shark and towed the sea creature to the city's boulevard and called the city's Department of Agriculture for help.

The shark, however, died before it could be set free.

Aurelia quoted Faith Napigkit, an officer of the Department of Agriculture in Bayawan, as saying that this was the second reported sighting of a megamouth shark in Bayawan and probably the seventh in the Philippines. The first megamouth shark stranding in Bayawan City was recorded in Dec. 30, 2004.

Moonyeen Alava, marine species specialist with the Sulu-Sulawesi Seascape Project of Conservation International, said this shark is so rare that it could be only the 35th recorded specimen in the world.

Information on the megamouth shark (Megachasma pelagios) gathered from the website of the Florida Museum of Natural History says this shark is the most primitive living species within the order Lamniformes although the first megamouth shark was captured only in 1976.

The megamouth shark was first discovered in November 15, 1976 by a U.S. Navy ship looking for dummy torpedoes off the coast of Oahu, Hawaii.

It is so named because it has a huge mouth that extends behind the eyes. The megamouth shark is characterized by a distinctive white band on the anterior surface of the snout. It has approximately 50 rows of very small and numerous teeth on each jaw, but only three rows are functional.

Scientists believe that the shark swims slowly through aggregations of krill and other small prey with its mouth open. It feeds by jutting out its jaws and sucking in the prey. Once the prey is inside the closed mouth, the excess water is expelled through the gill openings.