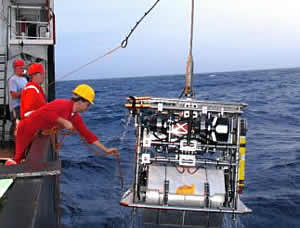 This is HybIS being recovered from the sea. Credit: NOCS

The deepest dive was onto the Iberian Abyssal Plain at the base of the seamount, at a depth of 4630 metres and the shallowest at 650 metres on the summit. The dives were part of the RRS Discovery cruise 343, during which Autosub 6000 was also tested to nearly 6000 metres. Together, HyBIS and Autosub6000 – the UK's deepest diving autonomous underwater vehicle (AUV) – will be deployed next year at the Mid-Cayman Rise, Caribbean in search of hydrothermal vents in the first of two NOCS cruises to this mid-ocean ridge. D343 provided the last opportunity to test the vehicles before next year's missions.

Despite only being a trial cruise, the Casablanca Seamount dives proved very interesting geologically. According to NOCS scientist Dr Bramley Murton, the HyBIS Chief Scientist, this volcano, which is about 15 million years old, is thought to be long extinct: "We expected to find a sediment-draped dome with little exposed rock and no signs of volcanic life. Instead we discovered a very rugged terrain, with vertical descents of over 100 metres, and an average slope on the flanks of 25 degrees."

Traverses from the summit and down the flanks revealed a change from explosive volcanic deposits of ash and pumice to massive lava flows. The transition was quite rapid some 400 metres below the summit and marked the start of cliffs caused by collapse of the volcanoes flanks. At its highest point, the volcano showed evidence of recent fluid flow with freshly excavated, 1𔃀-metre diameter craters.

Life on the volcano was varied. "We saw sponges, soft corals, lobsters, shrimp, sea cucumbers, sharks and rat-tails. One of the more astonishing sights was a field of silver eel-like fish hanging vertically in the water with their tails just touching the sea floor," said NOCS's Veit Huehnerbach, HyBIS co-pilot.

HyBIS is a remotely operated-TV-guided grab, developed between the Natural Environment Research Council (NERC) strategic research division (NSRD) of the National Oceanography Centre, Southampton and the off-shore engineering company Hydro-Lek. The vehicle has thrusters and cameras to assist the location of sampling sites. Its depth capability is 6000 metres and requires two people to pilot and operate it. Altogether, during cruise D343, HyBIS proved itself an excellent survey and sampling tool and a great asset to NOCS.