Biologist and Physicist Team Up to Study the Alligator's 'Death Roll'; No Schooling Necessary 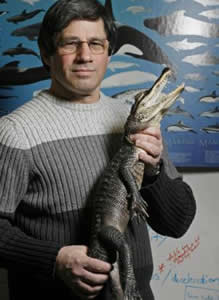 WEST CHESTER, Pennsylvania -- Other than on television, few of us have ever seen the spectacular spin (and ghastly consequences) of the crocodilian “death roll.” But, in a basement laboratory in the University’s Schmucker’s Science building, a biologist and physicist have been video taping young alligators spinning with the ferocity of their older, larger cousins in the wild.

In doing so, the researchers created a mathematical model that provides the first explanation as to how these long thin reptiles are able to spin with such force in the water.

In a paper entitled, “Death roll of the alligator: mechanics of twist feeding in water,” to be published in the Journal of Experimental Biology, West Chester University biologist Frank Fish and physicist Anthony Nicastro and colleagues Sandra Bostic and John Beneski chronicled the particular spinning movement of juvenile alligators in water after biting into a pliable target. Through the use of high-speed videos, the researchers were able to examine the specific mechanics of the spinning maneuver – detailing the movements of body components and measuring their spinning performance.

“The death roll is a behavioral strategy referred to as ‘rotational feeding,’” explains Fish, who along with other colleagues has also studied the mechanic and energetic performance of spinning dolphins.

“Spinning motions are seen in birds, sea lions and humpback whales as well, but these animals use their wings or wing-like flippers to actually roll or bank,” says Fish.

Alligators, on the other hand, tuck in their legs, and in a matter of milliseconds, move their tails to the side, which changes the moment of inertia. Movement of the moment of inertia on the body and on the tail allows the crocodilian to start spinning. The alligator spins faster, much in the same way that figure skaters’ spinning motion speeds up when they bring their arms up or toward their chests.

“The alligator centralizes its mass and axis of rotation by keeping its legs close to its body. This also effectively reduces drag and enables it to create a faster, more powerful spin,” says Fish.

“Similarly,” he adds, “human divers create a central axis as they somersault from a diving board.”

Fish and his colleagues also were able to demonstrate that alligators could not be induced to spin when their tails were restrained, even as they held onto their prey.

Scientists have long known that crocodilians performed the death roll to subdue and dismember large prey that they otherwise could not chew because of their conical, spike-like teeth. “These animals don’t chew their prey,” says Fish. “So, when they capture a prey that’s exceptionally big, they go into the death roll in order to break it apart.”

Fish and his team not only learned the mechanics involved in this process, but contrary to earlier theories, they found that the capacity to perform the death roll is not limited to larger crocodilians, nor is it a learned behavior.

“The young alligators we have in the lab were collected very early or as eggs, so they did not learn about the death roll from older alligators,” says Fish.

“When we gave them meat and tugged on it, they started producing the death roll immediately on their own.”