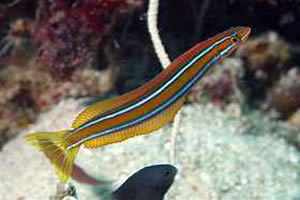 BRISBANE, Australia -- Scientists from The University of Queensland have revealed a coral reef fish has been successfully living incognito by using its colour-changing ability.

Lead author of the study Dr Karen Cheney, from UQ's School of Biological Sciences, said the blue-striped fangblenny used a number of different disguises to pass undetected on coral reefs.

“The fangblenny mimics juvenile cleaner fish, but instead of removing ectoparasites from reef fish, they attack passing reef fish to nip at scales and fins,” Dr Cheney said.

“Fangblennies can also change their colour to hide in a number of different shoaling fish species.

“Many fish can alter their colouration, but the fangblenny is the first example of a vertebrate that can change their colour at will to mimic a variety of different species.

“The only other example of this occurs in the mimic octopus that can alter its colouration and shape to resemble lionfish, flatfish and sea snakes.”

Part of the fangblenny's success as a mimic was attributed to its consideration for the species it imitated.

“The fish that are being mimicked do not seem to react to the presence of fangblenny,” Dr Cheney said.

“Mimics often ‘hang around' cleaner fish, but although fish come to visit cleaners to have their parasites removed, fangblennies do not attack these fish but instead target passing reef fish.

“We think that this may help maintain the relationship between cleaner fish and mimic.

“If fangblennies attacked fish being cleaned, then cleaner fish would probably chase them away from their territory.

“Shoaling fish will often chase the fangblenny if it starts to nip at members in the shoal, which occasionally happens.”

Dr Cheney said it was possible fangblennies used colour vision to initiate their change in appearance, but further research was required to confirm this finding.

“The process of colour change has not been investigated in detail for the fangblenny,” she said.

“We haven't yet tested behaviourally that fangblennies can use colour vision to initiate colour change, but plan to do so.

“We have shown that these fish have the physiological basis for colour vision, unlike other marine animals, such as cephalopods, which have been shown to be colour blind.”