Guy Harvey And Neal Watson Join Forces With Dive Bimini; 'Neal Or Guy Might Be On Board Diving With You' 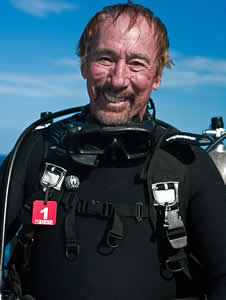 Neal Watson was re-elected president of the Bahamas Diving Association

The Bahamas -- Dive legend and businessman Neal Watson has been re-elected for another two-year term as president of the Bahamas Diving Association.

Watson has been a pioneer in the dive resort business starting his first dive operation in Freeport, Bahamas in 1965. He has been involved in owning and operating hotels, establishing a chain of dive operations, working in the treasure salvage business, stunt coordinator for the movie and TV industry, owned and operated an airline charter company and established a chain of Neal Watson's Undersea Adventure franchise dive operations in the Bahamas and Caribbean.

In 1985 Watson moved to Fort Lauderdale from Bimini and established Neal Watson's Undersea Adventures as a Florida Corporation. Shortly thereafter he started USA Travel Network, Inc., which is an ARC accredited tour company specializing in diving and adventure sports travel.