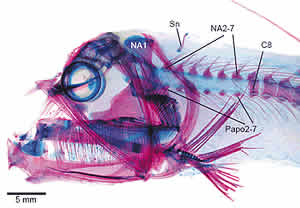 Close-up of head of dragonfish, Idiacanthus, showing its hanging barbel that has a photophore at its end. Â© Nalani Schnell

Deep sea dragonfish Eustomias with its striking barbel. This is one of the dragonfishes that was found to have vertebrae missing. Â© Nalani Schnell

LONDON, England -- The mystery of why a group of deep sea fishes has a gap between their skull and spine has been solved by an international team of scientists, including those at the Natural History Museum.

But they also appear to have a number of vertebrae missing that would normally connect their skulls to their vertebral column, or backbone, an observation that has puzzled scientists for many years.

There are 28 genera (major groups) of these fishes, representing more than 270 species, and all have this characteristic gap. But are missing vertebrae always the cause?

The team carried out the most detailed and comprehensive study so far of this group.

They stained the fish specimens so that nerves and bones were shown in different colors, producing images (such as the one at the top) and revealing clues about the mystery gap.

The team studied some specimens from the Museum's fish collection, which includes more than 2000 dragonfish specimens.

The team found vertebrae missing in members of only 2 of the genera of barbeled dragonfishes, Chauliodus, and Eustomias, and in the species Leptostomias gladiator. This loss occurred as they evolved.

Usually, fish backbones develop from front to back, (top to bottom in humans). However, in barbeled dragonfishes this is not the case, making the evolutionary loss of front vertebrae more likely.

Dr Britz explains, 'In stomiids [barbeled dragonfishes are in the Family Stomiidae], vertebrae develop in an unusual fashion from back to front, which facilitated the loss of front vertebrae. They have failed to form in development leaving a gap between the skull and backbone.

'This results in them having a more flexible head and makes them unique among all bony fishes in this respect.'

Gap due to long notochord

The gap in the backbone of the other barbeled dragonfishes studied are not caused by missing vertebrae but by a lengthening of the notochord.

The notochord is the primitive support structure for the backbone, a flexible rod-like structure that in higher vertebrates is incorporated into or replaced by the vertebral column. Barbeled dragonfishes

Barbeled dragonfishes are deep sea ray-finned fish. Most lack scales and they have a series of light-emitting organs called photophores.

The barbel that hangs from the lower jaw carries one of these photophores at its tip. It emits a blue light and is thought to help attract prey.